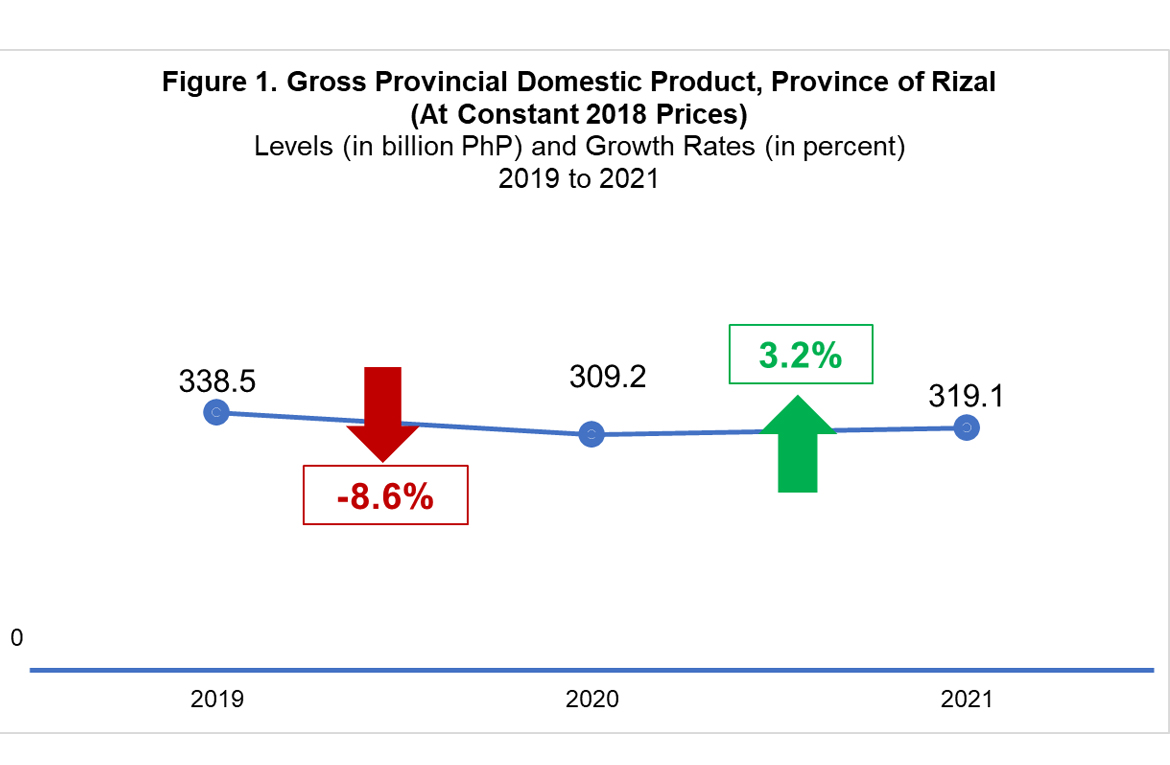 The economy of the Province of Rizal posted a growth of 3.2 percent in 2021, as compared with the decline of -8.6 percent recorded in the previous year. In 2021, the Gross Provincial Domestic Product (GPDP) of the Province was valued at ₱319.1 billion from the 2020 level of ₱309.2 billion. However, this was still lower than the pre-pandemic GPDP level of ₱338.5 billion (Figure 1).

Among 16 production industries, the top contributors to the 2021 GPDP growth were: Manufacturing, which grew by 3.3 percent; Information and communication, which posted an increase of 10.0 percent; and Construction, recorded a growth of 19.2 percent.

Of the three major economic industries, Industry and Services posted an increase of 6.0 percent and 5.0 percent, respectively. On the other hand, Agriculture, forestry, and fishing registered a decline of -40.5 percent.

The Philippine Statistics Authority (PSA) established through Republic Act No. 10625 or The Philippine Statistical Act of 2013, is tasked, among others, to compile and maintain macroeconomic accounts and indicators, at the national and subnational level. At the provincial level, the Provincial Product Accounts (PPA) is a mechanism to measure the economic performance of the province or highly urbanized cities (HUCs) at a given time.

Starting in 2021, the PSA annually releases the provincial level economic performances following the identified pilot provinces and HUCS.  Province of Rizal is one of the pilot areas for PPA compilation starting 2022. For full report, statistical tables, and visuals on the PPA releases, please visit our website at http://rsso04a.psa.gov.ph/rizal or at the PSA Regional Office or PSA Provincial offices.