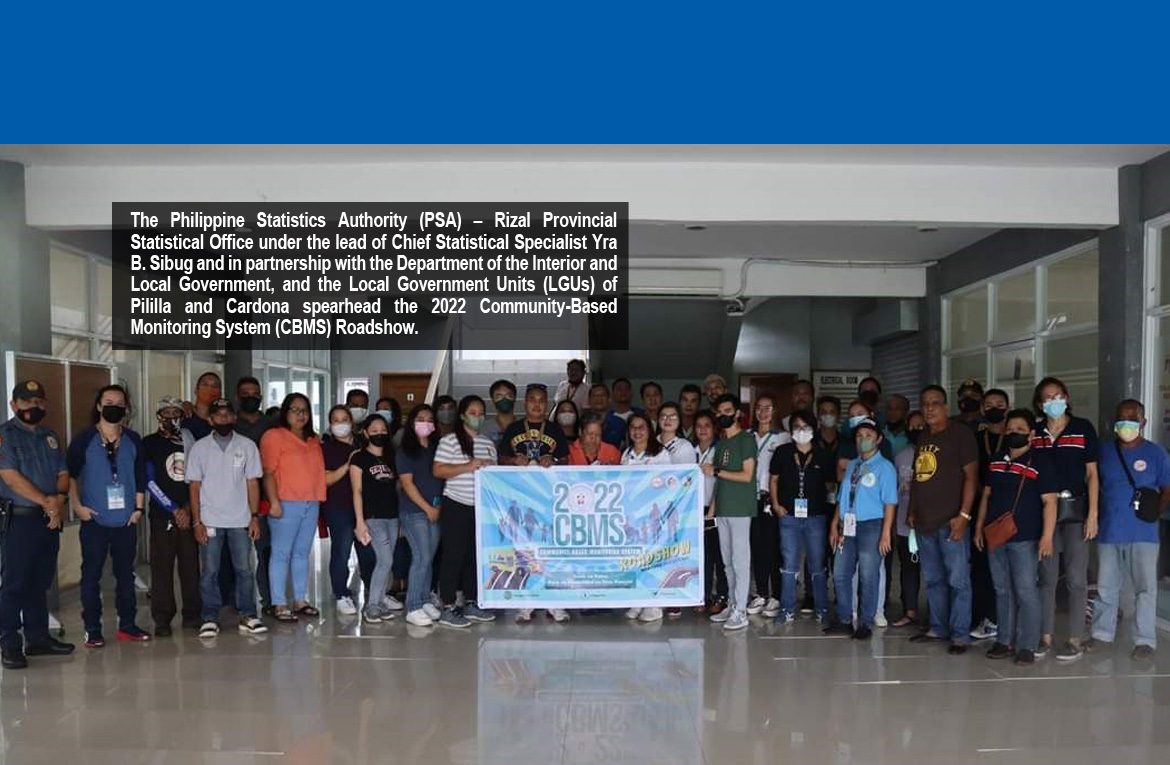 The Philippine Statistics Authority (PSA) – Rizal Provincial Statistical Office under the lead of Chief Statistical Specialist Yra B. Sibug, and in partnership with the Department of the Interior and Local Government, and the Local Government Units (LGUs) of Pililla and Cardona spearheaded the 2022 Community-Based Monitoring System (CBMS) Roadshow in their respective localities last August 3 and 4, 2022.

The roadshow is one of the strategies in order to realize the support and participation of the general public to the rollout of the CBMS scheduled this August 2022. Through this initiative, a stronger support and higher participation rate from each household residing in the locality during the data collection phase of the CBMS operations is being secured.

Additionally, it aims to establish the operationalization of CBMS as a joint partnership with the LGUs; serve as an avenue in providing knowledge awareness about the CBMS and its importance; and strengthen the promotions of the CBMS during the rollout.

The said activity was attended by the staff of PSA-Rizal, hired CBMS Enumerators and Area and Team Supervisors, and selected officials/personnel from different departments of the respective LGU. This was done by touring around the major roads of the concerned municipality while playing the official CBMS jingle, distributing CBMS flyers/brochures, and games.

The 2022 CBMS Roadshow is a dedicated campaign initiative for the promotion of the CBMS operations and a part of the Information, Education, and Communications campaign which is deemed vital in increasing the awareness and knowledge on CBMS and its advocacy, targeting the would-be respondents to participate in this statistical activity. Caption Website (Put text of caption inside photo itself): Participating staff and employees of PSA-Rizal, LGU of Cardona, and CBMS hired Enumerators and Supervisors assemble for a group photo during the 2022 CBMS Roadshow conducted last August 4, 2022.