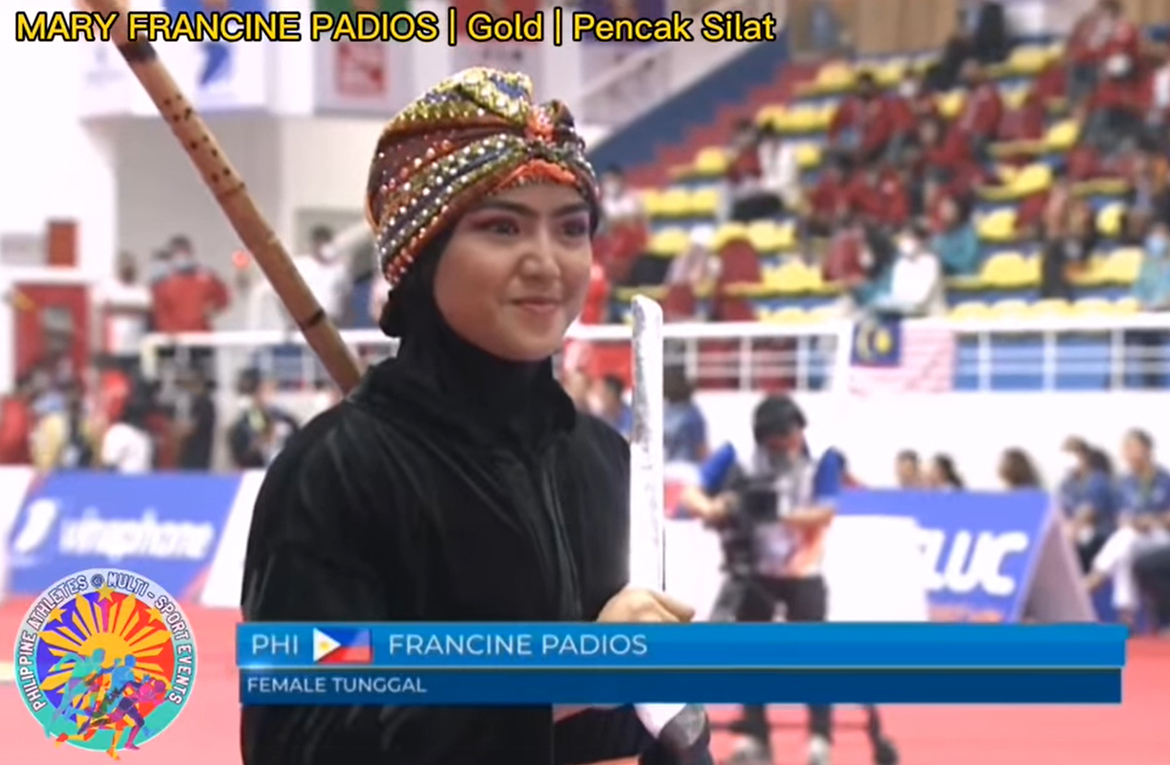 The victory of the 18-year-old native of Kalibo, Aklan put the Philippines on the medals table that Vietnam started to dominate a day before the biennial multi-sport festival officially opens at the My Dinh National Stadium.

Padios improved on her silver medal finish in the 2019 Philippine Games, inspired by the misfortune that struck her dad, Jerome, just before Christmas.

“My dad has become my inspiration after he figured in a terrible car accident on her way home in Aklan just before Christmas,” said Padios, whose dad is in a coma. “He was so exhausted and drowsy from work that he slept at the wheel and met with an accident.

“He’s been motivating me ever since,” said Padios, whose score of 9.960 powered her past 2019 winner and favorite Arum Sari of Indonesia, who settled for the silver with 9.945 points.

Vietnam bolstered its bid to snatch the overall title from the Philippines, having amassed a front-running haul of six gold, five silver, and six bronze medals as of posting time.

Malaysia kept in step with a similar six-gold output but had less silver and bronze with one and four, respectively, followed by Indonesia (3-4-0 gold-silver-bronze), Singapore (1-3-3), and Thailand 1-2-3.

Outside of the hosts, the Malaysians and the Filipinos, no other country in the 11-member SEA Games has won gold so far.

On Tuesday, Filipino beach handball players gave Vietnam but eventually lost in a shootout 14-12, 18-12 (8-10) to settle for a silver medal that coach Joanna Franquelli said shone like gold.

“I am really proud of what the team has accomplished in two years that we were not able to train together because of the restrictions due to COVID-19, but we’re happy with the result,” Franquelli, a former national athlete in basketball and fencing, said.

“We exceeded expectations, and no one expected us to get this silver. They were expecting Vietnam and Thailand to slug it out for the gold, but it turned out that we’re the one who fought for the gold, and it was a close one,” Franquelli added.

In football, Myanmar threw a monkey wrench on the Philippine Under-23 squad’s semi final bid last Tuesday night by scoring a stunning 3-2 come-from-behind win at the Viet Tri Stadium in Phu Tho province.

Up 2-1 at the half, the Filipinos saw their goal of entering the semifinals for the first time stymied as Lwin Moe Aung and Soe Moe Kyaw struck in quick succession in the 51st and 53rd minutes, respectively, to lift the Burmese on top of Group A with their second straight win, good for six points.

Veteran striker Jovin Bedic scored a brace in the 34th and 38th minutes but his heroics went for naught as the charges of coach Norman Fegidero absorbed their first loss in three matches and remained in second place with four points.

They were still ahead on goal difference – 4-3 – over defending champion Vietnam, which also had four points on a win and the scoreless draw with the Philippines last Sunday.

The Filipino booters will have a much-needed two-day respite before they battle Indonesia in a must-win match tomorrow at the 16,000-seat Viet Tri Stadium in the Phu Tho provincial capital, 70 kilometers northwest of Hanoi.

They will also be hoping the Burmese can also upend the reigning champions the same day which would pave the way for the Philippines to reach the men’s semis for the first time since the national squad bannered by Fegidero last achieved the feat in the 1991 Manila SEA Games.

Pinoy rowers made their presence felt on other fronts despite using borrowed boats, bagging a silver and bronze medal, respectively, in the men’s doubles lightweight sculls and women’s quadruple sculls at the Thu Nguyen Boat Racing Center in Hai Phong Bay.

Tokyo Olympic Games veteran Cris Nievarez and Christian Joseph Jasmin settled for the silver with a time of seven minutes and .05.585 seconds, finishing behind the Indon tandem of Ardi Kasadi and Kakan Usmana (7:01.385). Joannie del Gaco, Amelyn Pagulauyan, Mireille Cua, and Kristine Paraon won the bronze by clocking 7:28.879 and contributed to the country’s medal output that day.