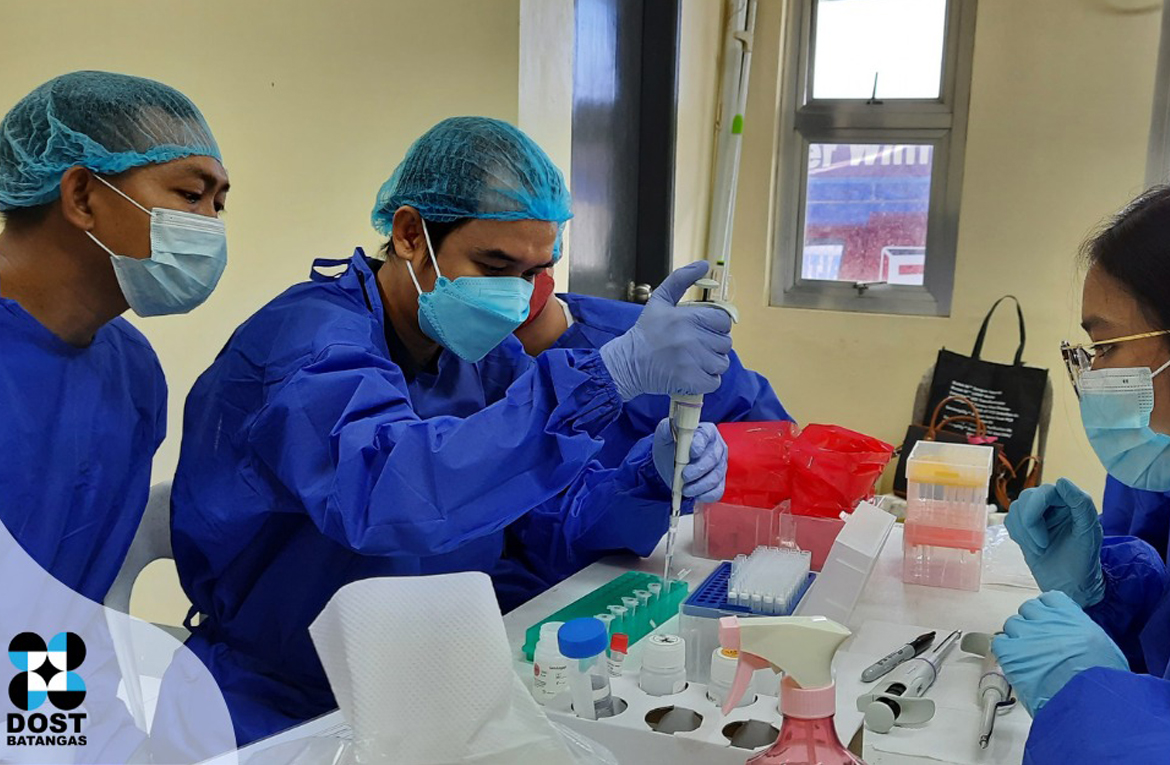 The pursuit of making the island Municipality of Tingloy a Science and Technology-empowered community continues!

Last February 21-22, the dengue virus detection kit called BioTek-M Dengue Aqua Kit was officially deployed to the Rural Health Unit (RHU) of the municipality. The personnel of the health unit were also trained on the use of equipment. The Department of Science and Technology (DOST) CALABARZON, in partnership with Manila HealthTek Inc., facilitated the technology transfer which primarily aims to provide an accurate, fast and efficient detection of the dengue virus from suspected patients in the municipality.

BioTek-M acts as a confirmatory test for diagnosis of dengue infection in the first 0-5 days of illness, and results are known in an hour or less. Designed to be used in hospitals or clinics with minimal laboratory facilities like the RHU of Tingloy, using Biotek M would mean less admissions for dengue-suspected cases, therefore saving resources for both hospital and patients. This test is as efficient but is less costly than the currently available Polymerase Chain Reaction (PCR) technology used in dengue detection.

The technology transfer activity started with the discussion of the basic concepts of the BioTek-M Dengue Aqua Kit. Ms. Marjorie Zulueta, Field Application Specialist at Manila HealthTek Inc., spearheaded the discussion and covered the dengue virus and its prevalence in the Philippines. Based on her discussion, the disease has a higher fatality rate in the country compared to other tropical countries due to failure on virus detection in its early stages, which is around 7 days from the initial infection. Ms. Zulueta stressed that most of the dengue patients in the country were only rushed to hospitals when symptoms entered the critical stage, a reason why cases often lead to fatalities. Thus, the development of BioTek-M is a response to the call for a more economical and faster detection technology that can be deployed to health facilities to avoid fatalities of the disease.

The technicalities of BioTek-M were then presented to the beneficiaries. Ms. Katherine Dubla, also a Field Application Specialist at Manila HealthTek Inc., shared how the kit works. She started by explaining the extraction process of the Ribonucleic acid (RNA) in serum/plasma samples, then amplifying the extracted RNA with SYBR Green dye and observing the results via LED Translluminator. The device shall light up if the samples are found positive, as Ms. Dubla mentioned. The test is rapid, with results available within an hour, accurate with high sensitivity, and capable of empowering and adding more detection for efficiency. The kit is less expensive because only the consumable items will be purchased in every run.

A hands-on activity on RNA extraction was conducted to ensure learning application the following day. The activity started with a briefing on the procedures and standard practices that must be observed during the testing. Wearing of personal protective equipment and decontamination of the facility and equipment followed. A pipetting workshop was also conducted before the actual use of the BioTek-M.

After all the workshops, Mr. Chuck Corpuz and Mr. Cedric Rodriguez, both from DOST CALABARZON, officially turned over all the equipment package for BioTek-M to Dr. Patt Flexl Mandocdoc, Rural Health Physician of Tingloy. It includes one set of BioTek-M lamp heater, EasyView LED Translluminator, 3 units of Micropipettes, 1 unit of mini centrifuge, and the BioTek-M Dengue Aqua Kit Package containing filtered tips, centrifuge tubes and kits good for handling 50 reactions.

BioTek-M is part of the “Lab-in-a-Mug” Project that aims to capacitate RHUs on the detection of dengue virus and protect their population through early detection. The participants of the training were the nurses and the medical technologist of the RHU. Dr. Mandocdoc, were also present during the activity.        The interventions provided to the municipality are part of DOST CALABARZON’s Community Empowerment thru Science and Technology program for the island Municipality of Tingloy.