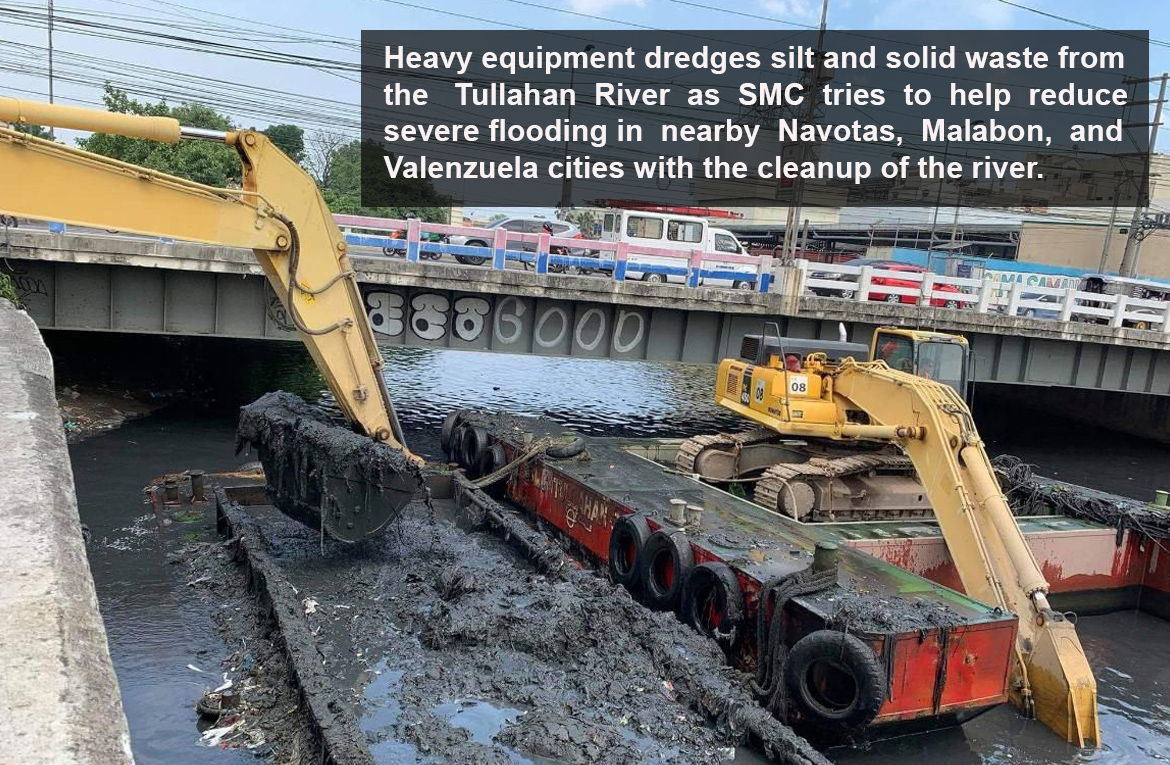 San Miguel Corporation (SMC) reported that its river cleanup initiatives at the Pasig River and Tullahan River, both major tributaries crucial to the rehabilitation of the Manila Bay, have exceeded initial targets even as it prepares to ramp up efforts in the coming months with the easing of quarantine restrictions.

SMC president Ramon S. Ang said the company will aim to steadily increase the daily extraction output from the two rivers. This is in anticipation of potential monsoon rains that usually cause heavy floods in Metro Manila cities near the 27-kilometer Pasig River, and the cities of Navotas, Malabon, Valenzuela, and Caloocan alongside the 27-kilometer Tullahan River.

Both rivers empty out to the Manila Bay and were included in the list of the world’s top 10 rivers that pollute the oceans with plastic waste, according to a report by research website Ourworldindata.org early this year.

The rivers also receive untreated sewage from households and nearby industries.

“We are proud of our crews’ dedication in getting the rivers cleaned, deepened, and widened prior to the rainy season. This has led to noticeable changes in flooding patterns, with no severe flooding incidents reported particularly in areas near Tullahan River, the past few months,” Ang said.

With the Pasig river’s waste and silt extraction output at 90,000 metric tons as of November 5, SMC expects to hit the 100,000-metric ton mark by the middle of November, as daily output has been increased from 1,400 to 1,700 metric tons per day.

“Once we reach and maintain at least 2,000 metric tons per day output starting this month, we will be on track to achieving our 50,000-metric ton monthly target before the year ends. To meet our goals, we are prepared to bring in more equipment and personnel to further expedite the process,” Ang said.

The Pasig River rehabilitation initiative, a P2 billion project in cooperation with the Department of Environment and Natural Resources, aims to extract at least 600,000 metric tons of silt and solid waste per year, in order to clean up the waterway, help improve water quality, and reduce flooding in several cities in Metro Manila.

Apart from current pilot areas in Pandacan and Malacañang, SMC is also looking to prioritize cleaning up other shallow portions of Pasig River, namely the C-5 area near the Marikina river junction, at the mouth of Manila Bay, and in the Makati-Estrella area.

For the P1-billion Tullahan River project, also fully-funded by SMC and done in cooperation with the DENR, daily output is now at an average of 2,500 metric tons. Meanwhile, total output since June 2020, when the project went full steam after the first implementation of enhanced community quarantine, has already reached 522,498 metric tons, as of November 5.

By December, Ang said the goal is to further increase the extraction capacity for the Tullahan river, as soon as a set of brand new equipment that it acquired, arrives.

Before the year ends, SMC aims to extract a total of over 1 million metric tons of waste from the Tullahan, and expects to hit the 600,000 tons for Sectors One to Five of the project, also before the year ends.

The five sectors span the rivers’s length from the mouth of Manila Bay in Navotas City, up to Potrero in Malabon and Valenzuela City. Dredging is currently focused on parts of the river in Potrero, Malabon and Marulas, Valenzuela, and areas near Catmon and Maysilo in Malabon.

“The clean-up and dredging of these rivers are the first and necessary steps to remove years and years of accumulated wastes in them, and reducing severe flooding in adjacent areas. But we need the support of all stakeholders and local communities, in order to keep them clean and truly rehabilitate them over time. This means not dumping garbage or sewage or any other harmful substances on the river. Installation of sewage treatment systems to reduce the release of untreated sewage water in the river, and more efficient solid waste management, are critical to achieving the full and long-term benefits of these clean-up projects,” Ang said.

“If we can get all these initiatives together with our river cleanup, we can look forward to the day when our children can swim and safely fish in these rivers without the fear of catching any water-borne diseases. A change of mindset is important to emphasize that rivers are a source of food, water, and for recreation, not for throwing garbage and sewage,” Ang added.

For its New Manila International Airport (NMIA) project in the town of Bulakan, SMC is also initiating a river channel enhancement program for the tributaries belonging to the Marilao-Meycauayan-Obando River System (MMORS) in Bulacan province.