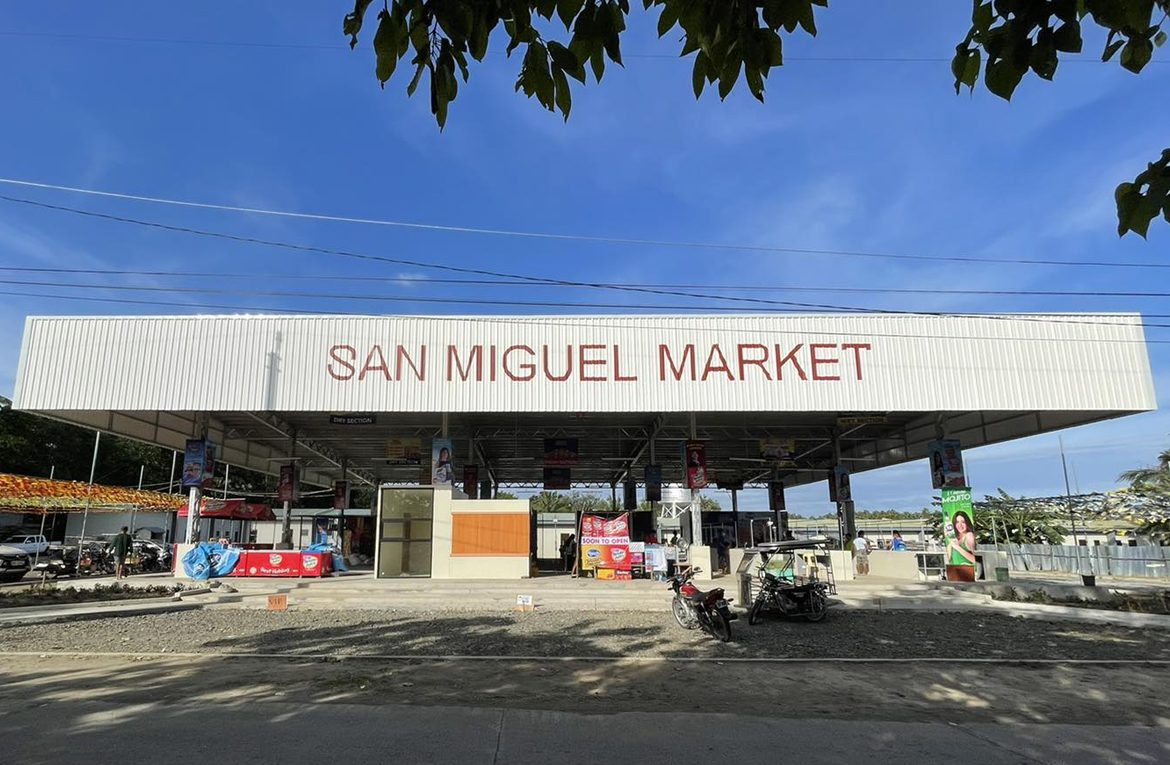 San Miguel Corporation (SMC) will expand its newly-opened marketplace for fisherfolk and farmers in Sariaya, Quezon and turn it into a major wholesale market or “bagsakan center” of fresh goods from Southern Luzon—and eventually providing food supplies to nearby provinces and Metro Manila.

Dubbed the “San Miguel Market”, the new marketplace was soft-opened recently with 56 vendors, many of them coming from the 350 families that SMC has helped relocate from high-risk coastal areas.

The marketplace is the latest addition to SMC’s sustainable community project in Sariaya, which includes the 5.4-hectare San Miguel-Christian Gayeta village—that features disaster-resilient houses—and a 3.5-hectare fishermen’s dock with fishermen’s hall, that can secure up to 100 boats and store 70 boat engines and other fishing equipment.

“This market is just in its initial phase. While it’s already operational and benefitting residents from our model community and nearby barangays, our vision is to make this even bigger, to accommodate more farmers and fisherfolk who want to sell their goods here,” SMC president Ramon S. Ang, said.

“Our goal is to expand this to up to 10,000 square meters or one hectare, from its present 3,000 square meters total area. With that size, it can become a major wholesale market or ‘bagsakan’ of fresh goods from all over Sariaya and the rest of Quezon province. It can be a source of fresh produce for neighboring provinces and even Metro Manila—so many farmers and fishermen from all over South Luzon can benefit.”

The marketplace was soft-opened over the weekend by Sariaya Mayor Marcelo Gayeta and SMC Special Projects Manager Micaela Rosales. It is jointly-managed and operated by residents and tenants from San Miguel-Christian Gayeta Homes.

“Creating more jobs and livelihood will help us rise above this pandemic. In the future, as a wholesale marketplace, the San Miguel Market will be able to bring more bulk sellers and buyers together, and assemble quality produce from all over Sariaya and Quezon province,” Ang said.

“Initially, our goal was just to provide a venue where our relocatees can sell their produce. But given that many Filipinos are in need of jobs and livelihood during these difficult times, expanding this facility makes a lot of sense. By doing so, we will be giving more Filipinos the opportunity to start their own businesses, and a chance at a better life.”

The market will is also seen to complement SMC’s integrated food and beverage complex development in the area, in terms of job and livelihood generation. SMC is investing to build a ready-to-eat food manufacturing facility, a grains terminal, feed mill, poultry dressing plant, a brewery, and international port facilities in Sariaya, which is expected to generate a significant number of jobs and boost the economy of Quezon province.

“We will start the market’s expansion as soon as possible, even as we continue assisting the current tenants and residents of the village in ensuring the present market conforms to the most stringent food safety, hygiene, and health, and safety standards,” he said.

To date, a total of 555 households have been relocated by SMC from high-risk coastal areas. Thus far, a total of 141 families have moved to the San Miguel-Christian Gayeta Village, while others who received financial assistance from SMC have either bought or built new houses in other areas.

“The San Miguel Market is part of an overall plan to make our relocatees’ lives better. This includes providing them financial assistance to buy or build their own homes, or avail of free house-and-lots at our sustainable housing community; livelihood training in partnership with TESDA (Technical Education Skills and Development Authority), and building this market for them to sell their produce,” he said.

Meanwhile, the Sariaya fishermen’s dock and Sariaya Fishermen’s Hall, which SMC opened for residents last year, further enhances their income generation by affording them to reduce costs while getting better prices for their fresh catch.

Through an SMC-TESDA partnership, around a total of 99 residents thus far have graduated from community- based training on various skills, particularly meat and fish processing, organic farming, dressmaking, and table setting.

SMC’s upcoming agri-related investments in Sariaya are part of the company’s nationwide efforts to support the agriculture sector and local businesses, as well as boost food security.

Aside from the San Miguel Market, SMC is also set to convert an unused 4,000-square meter property in Cabuyao, Laguna into a weekend community market called the Circolo market.

Located right in the middle of a bustling, high-traffic residential and industrial area, the weekend market aims to help sustain the livelihoods of pandemic-hit farmers and small businesses.

In the early months of the pandemic, SMC partnered with the Department of Agriculture (DA) to establish “Kadiwa ni Ani at Kita” farmers’ stores at Petron gas stations in Metro Manila.

These farmers’ stores benefited farmers who were unable to bring their produce to Metro Manila markets due to the strict quarantine measures. The “Kadiwa” stores allowed provided them a ready market for their goods and at the same time made fresh produce more easily accessible to consumers.

With the DA’s help SMC also purchased 524 million kilograms of corn from farmers across Central Luzon, Pangasinan, and Camarines Sur. The company also partnered with social enterprise Rural Rising Philippines to put up Better World Diliman that serves as a ready-market for excess produce bought from farmers at better-than-farmgate prices, and sold to consumers and resellers for low prices.