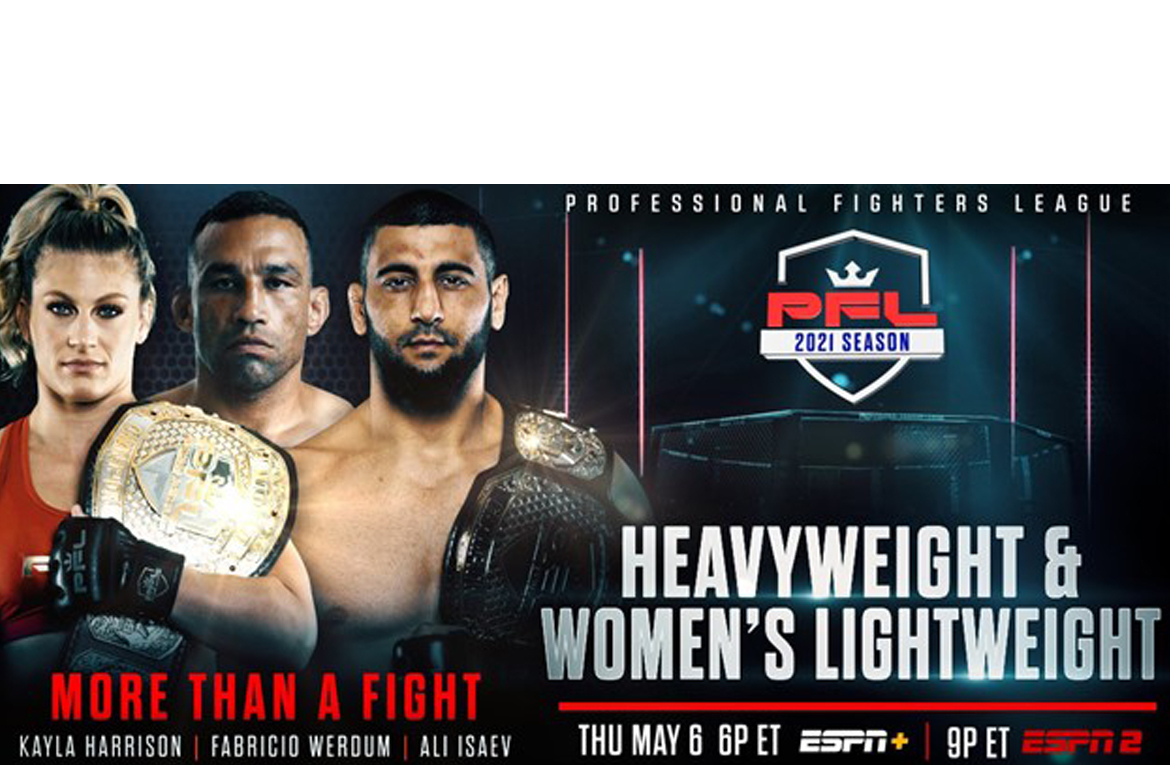 NEW YORK –The Professional Fighters League (PFL), the fastest growing and most innovative sports league in the world, today announced its heavyweight and women’s lightweight rosters for the 2021 Regular Season, with Ali Isaev (heavyweight) and Kayla Harrison (women’s lightweight) both kicking off their campaigns to repeat as PFL champions on May 6. The new PFL season begins April 23 and events throughout the season will be on ESPN2, ESPN+ and ESPN Deportes in primetime.

Isaev’s miraculous comeback in the semifinals against Denis Goltsov propelled him to gold in 2019. While Goltsov returns for another crack at the PFL strap, he will also have to contend with one of the greatest heavyweights to ever compete in MMA. Former UFC champion Fabricio Werdum will be the big favorite heading into the 2021 season, but he is far from the only challenger in the division. Mohammed Usman, brother of UFC welterweight champion Kamaru    Usman, has his sights set on adding to the family’s legacy in the sport of MMA.

They will be joined by highly-ranked Justin Willis, Ante Delija, 6-foot-8 giant Renan Ferreira, Hatef Moeil, Bruno Cappelozza and U.S. Army combative instructor Brandon Sayles. Harrison will once again be the marquee name in the women’s lightweight division, but joining her and 2019 runner-up Larissa Pacheco will be an upgraded cast looking to give the two-time Olympian a run for this year’s PFL title. Highly-regarded Belgian judoka Cindy Dandois, returning striking expert Genah Fabian and undefeated Laura Sanchez are a few of the athletes poised to test Harrison as she continues her ascension to the peak of the MMA world.

“Our fighters continue to showcase their smarts, grit and bold personalities as we get closer and closer to the season, and we are excited to support them in their journeys with the PFL,” said PFL CEO, Peter Murray. “Each fighter has his or her own unique journey and we are confident the PFL will provide them and our fans with ample opportunity for exciting matchups making it a great season.”

“Everyone loves to see the big boys go out and sling the heavy leather,” said PFL President of Fighter Operations, Ray Sefo. “As a former heavyweight I’m no different. I’m also very excited to see our women’s division kick off their season. We’ve brought in the best talent in the world to challenge Kayla and Larissa and it will be an even more challenging season for these very talented athletes.”

Professional Fighters League has quickly established itself as the No. 2 MMA company in the world. The league has experienced tremendous YoY growth across digital channels – 68% follower increase on Instagram, 30% total audience growth across digital and a 200% social engagement spike. Domestic linear viewing audience was up 43% in 2019, and the Championship on New Year’s Eve surpassed 500,000 viewers, a 65% YoY increase.

The Professional Fighters League (PFL) presents MMA for the first time in the sport-season format where individual fighters control their own destiny, competing in a Regular Season, Playoffs, and Championship for a million-dollar prize. PFL’s differentiated format and exciting fights sparked breakout growth for the league. PFL events are carried live on ESPN2 and ESPN+ in the United States and distributed to 160 additional countries around the world on premium sports networks. For more info visit www.PFLmma.com and follow PFL on Instagram (@PFLmma), Twitter (@ProFightLeague), and Facebook (/PFLmma).