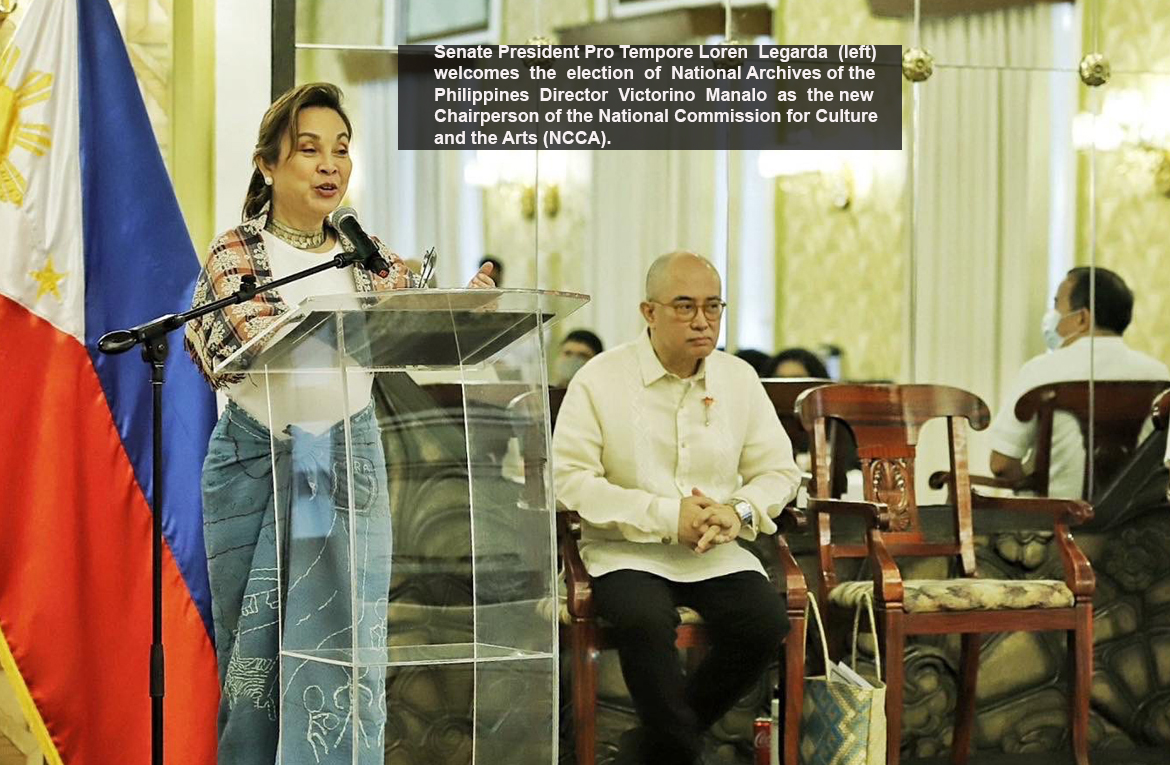 Senate President Pro Tempore Loren Legarda welcomed the election of National Archives of the Philippines Director Victorino Manalo as the new Chairperson of the National Commission for Culture and the Arts (NCCA) and reassured her continuous commitment to promoting Philippine culture.

Legarda, NCCA’s 2016 Dangal ng Haraya: Tagapagtaguyod ng Sining at Kultura (Patron of Arts and Culture) awardee, has expressed support for Manalo’s nomination and administered his oath of office as the 14th Chairperson of the NCCA on December 29, 2022, held at the Metropolitan Theater in Manila.

“I have unwavering faith that under the leadership of Chairperson Victorino Manalo, the NCCA will continue to foster the Filipino people’s identity and develop a sense of national pride through the development of original artistic expression and the preservation, promotion, and protection of our cultural heritage,” Legarda stated.

As a staunch advocate of promoting the culture and the arts, Legarda has filed several proposed measures for the conservation of Philippine traditions and heritage.

Among these are SBN 244 or the Philippine Culinary Heritage Act of 2022, SBN 624 or An Act Establishing the ‘Linangan ng Likhang-Bayan (Institute for Living Traditions), and SBN 622 amending the National Cultural Heritage Act of 2009 to strengthen heritage conservation in the country and mandate the local government units to conduct a comprehensive cultural mapping of their areas of jurisdiction.

In partnership with the NCCA, Legarda supported various programs to preserve and document Filipino traditional heritage, including ‘Dayaw,’ a documentary which showcases the indigenous culture and customs of Filipinos, and ‘Buhay na Buhay,’ an informative series that introduces the eight living cultures of the Philippines.

“Rest assured that I remain your steadfast partner in strengthening the Filipino spirit, developing national identity and creativity, and protecting and sharing our rich cultural heritage.”

Manalo was elected head by the NCCA Board of Commissioners last December 29, 2022, replacing Chairperson Rene Escalante.

His term began last January 1, 2023, and will end on December 31, 2025. Legarda also congratulated Escalante for his support and commitment to NCCA and for being instrumental to many of the successes of the Commission, which continuously makes significant and long-lasting contributions to the preservation, development, and promotion of Philippine culture and the arts, according to Legarda.