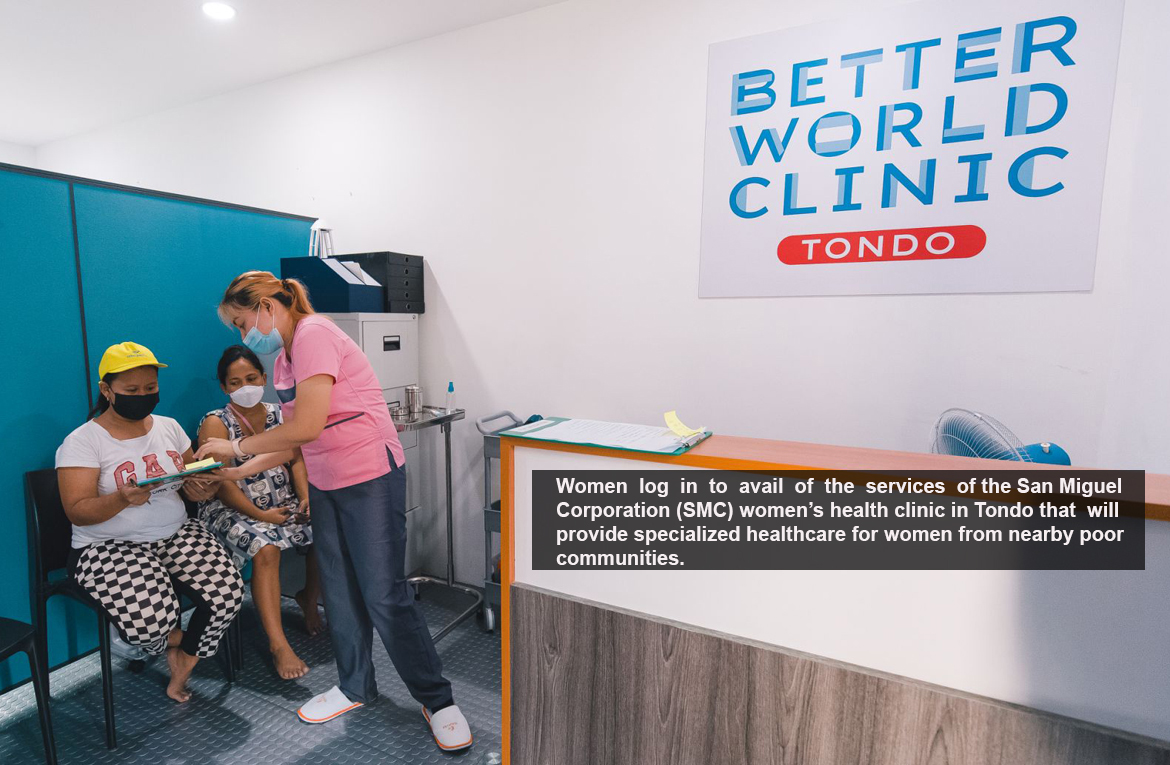 San Miguel Corporation (SMC) opened a women’s health clinic in Tondo that will provide specialized healthcare for women from nearby poor communities, with the goal of reducing their risk of breast and cervical cancer — two of the most common diseases among Filipino women.

The clinic, located within SMC’s “Better World Tondo” community center, which also functions as a feeding and learning center and food bank, will also hold regular health education sessions that will teach women from urban poor communities about cancer prevention, pregnancy healthcare, and nutrition, among others.

“For many women in poor communities, the needs of the family takes precedence over their own health. Instead of paying for healthcare, they might as well just buy food, pay for the rent, or buy school supplies. This is the unfortunate situation in which women find themselves in every day. That is why they may often postpone the diagnosis of a serious health problem. With this clinic, we hope to be able to provide women with the proper health care they need,” Ang said.

“Apart from giving them access to free and specialized medical care and equipment, we will also work with medical experts to continuously guide them on how to prevent serious illnesses through early detection,” he adds.

Prior to the opening of its women’s health clinic, Ang said that SMC had conducted an in-person survey among 170 women in their BWT community.

The survey revealed that close to 30% of the respondents had reproductive health-related illnesses, including breast and cervical cancer, polycystic ovary syndrome (PCOS), and myomas.

This percentage may even increase, once more women undergo a thorough medical check-up at the clinic.

According to the International Agency for Research on Cancer, an agency of the World Health Organization, breast and cervical cancer were the top two cancers in terms of incidence among Filipino women in 2020.

The agency logged 27,163 new cases of breast cancer and 7,897 new cases of cervical cancer in that year alone.

Various studies have also shown that low health literacy and the high costs of diagnosing cancer are major problems affecting how this disease is treated and prevented in the Philippines, especially in urban poor communities.

The members consist of mothers of students who attend BWT’s after-school learning program, and those who volunteer for the center’s overall upkeep, which includes cooking and cleaning.

Family members and dependents of these women, as well as those living in neighboring communities, can also make use the clinic’s free consultation, while other medical services will be available to them for a very minimal fee.

In the coming months, SMC also plans to work with a number of barangays in the area to conduct family planning sessions in the clinic.

This is the second major initiative of SMC to advocate the importance of health among underprivileged women.

BWC regularly holds workshops that deal with gender equality, marriage, parenting, and building a sense of worth. It also offers free health education sessions and reproductive health services to hundreds of mothers from nearby communities.

SMC established Better World Tondo in September 2019 in partnership with Rise Against Hunger and AHA Learning Center to help improve food security for urban poor families, and access to quality education for the children of Tondo.

Since then, it has served over 250,000 meals and distributed more than 80,000 grocery packs for families in Tondo.

The center has received close to P90 million in donations, including frozen and canned goods and dairy products from partner companies and business establishments.