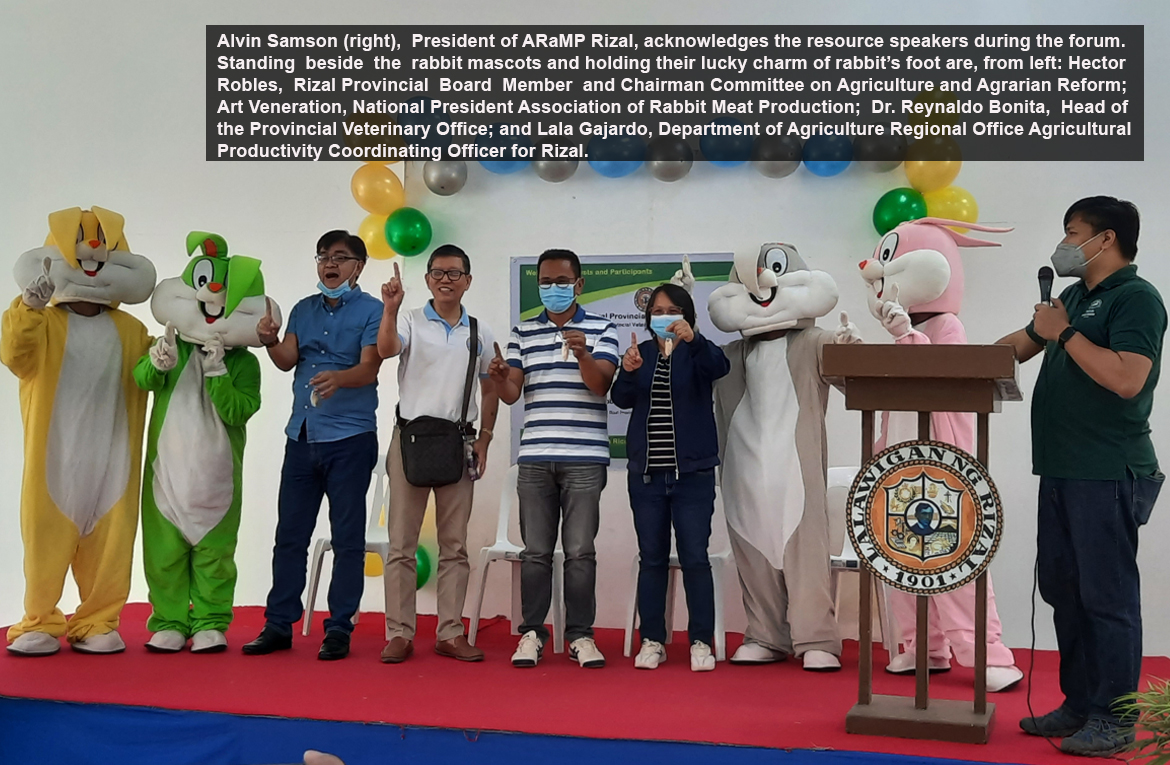 The forum helped participants appreciate opportunities for rabbit meat for health, livelihood and food security. It raised awareness for key development such issuances regarding rabbit meat production and gave recommendations in the areas of research in rabbit sciences.

Alvin Samson – President of ARaMP Rizal Chapter and lead convenor of the forum – conducted the orientation to the Stakeholders’ Forum.

He talked about the state of rabbit industry in Rizal including its profile, promise and path forward. Because of the present economic situation – including rapid devaluation of the peso causing runaway inflation – he said rabbit farming is now a matter of survival.

Dr. Reynaldo Bonita, Head of the Provincial Veterinary Office, confessed that there is a lot that needs to be resolved in the industry.

Hector Robles, Rizal Provincial Board Member and Chairman Committee on Agriculture and Agrarian Reform emphasized the need for the public to be aware that rabbits are not just pets and that rabbits are also livestock which can be raised for consumption.

He congratulated the Rizal stakeholders for the forum and for including the different sectors of society, including the academe, media and most important the local government units in the forum.

Gerald Aranas, Department of Agriculture-Field Operation Service said rabbit farming can be solution to the challenges of the livestock sector because rabbits are easier to raise compared to pigs or chicken.

He said raising rabbits can enjoy more government support if it is the product of the One Town, One Product in towns of Rizal. Also, unlike pork – which is haram or forbidden for consumption by Muslims – rabbit meat is halal.

Kyle Christine Pascual, Trade and Industry Development Specialist (CARP), Business Development Division, Negosyo Center Rizal said DTI can partner and enabler of the Rizal rabbit industry and enumerated the services the government agency can provide and how being accredited will help the industry.

The delegates from the different towns of Rizal brought food and refreshments for sharing.

There was Arroz Calde de Conejo from Antipolo before the start of the forum. Later during lunch Tinolang Kuneho from Teresa, Adobong Kuneho sa Gata, Rabbit Paella, Oven-Roasted Rabbit, Rabbit Igado from Morong, Pakbet with Giniling na Rabbit from Angono, Rabbit Caldereta from Cainta and Rabbit Curry were served at a free buffet table.

Delegates from Baras brought kanin while those from Montalban brought inumin.