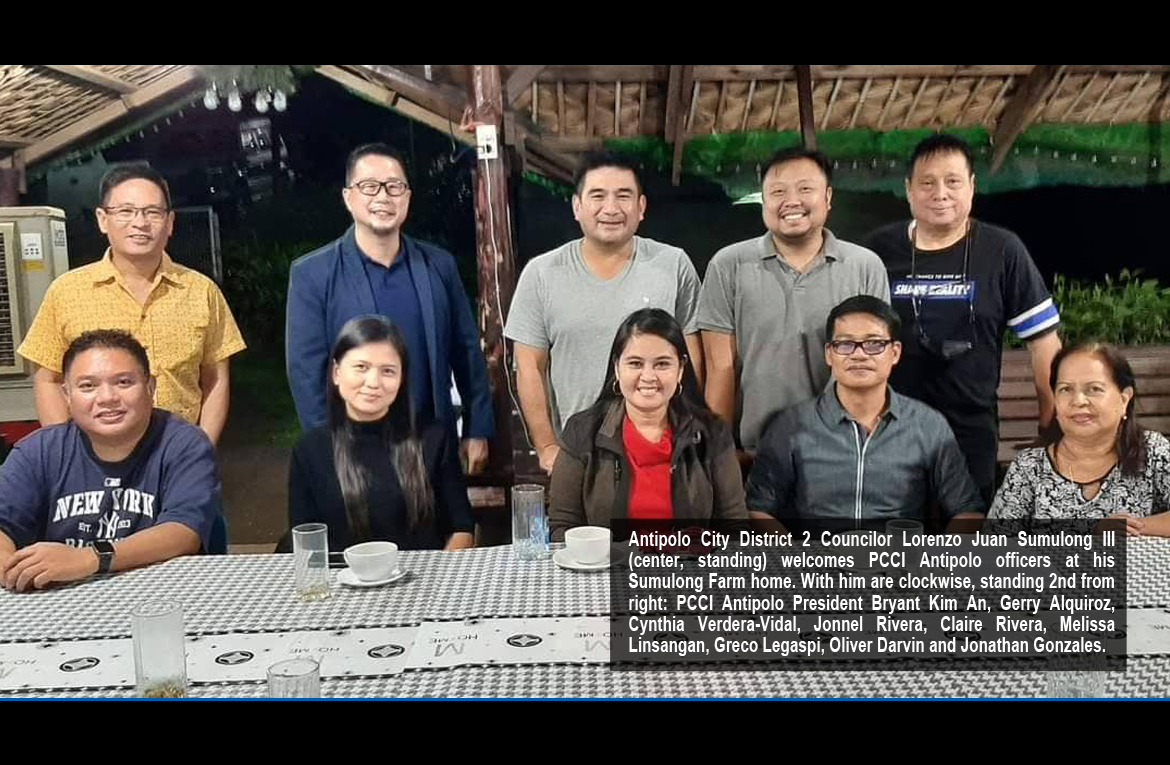 Officers of the Philippine Chamber of Commerce and Industry – Antipolo called on newly-elected Number 1 Councilor of District 2 of Antipolo City Lorenzo Juan Sumulong III at his Sumulong Farm home.

What may have started as a social call turned into a meaningful discussion of some of the most important concerns currently facing Antipolo.

Sumulong emphasized his support for the business community adding that he wanted to increase the number of businesses in Antipolo so that there will be likewise be an increase in employment as well as revenue for the city government.

He added that he has been in close consultation with the public about the most pressing concerns in Antipolo like the worsening traffic situation. He said he is considering legislation that could regulate vehicle purchase of people who may not have parking space for their vehicles and possibly imposing minimal tax on newly purchased vehicles for road maintenance.

Kim An revealed that one-side parking in the streets of Antipolo City proper may be reintroduced in October this year.

Meanwhile, Alquiros brought up the most interesting topic discussed that evening saying the public should anticipate Antipolo becoming an international tourist destination with the designation of the Antipolo Cathedral as International Marian Shrine.

“And government has to redo the story-telling of what Antipolo is. It has to start with that. In all other places, in Europe and abroad there is a storytelling of your place. That is how you market it. Through traditional and social media,” said Alquiros.

“Even an ancestral home, you can market it in an interesting way that will attract tourists. We can focus on the cathedral and then the other areas (near the cathedral) that are tourist destinations.”

Instead of just local tourism, Antipolo can now focus on becoming an international tourist destination according to Alquiros.

Legaspi added that the Thunderbird Resort Hotel and Casino, because it is near Antipolo, as well as the numerous restaurants located along Sumulong Highway with a spectacular view overlooking Metro Manila should also be promoted.

Darvin interjected that Antipolo will be what the government wants it to be known for.