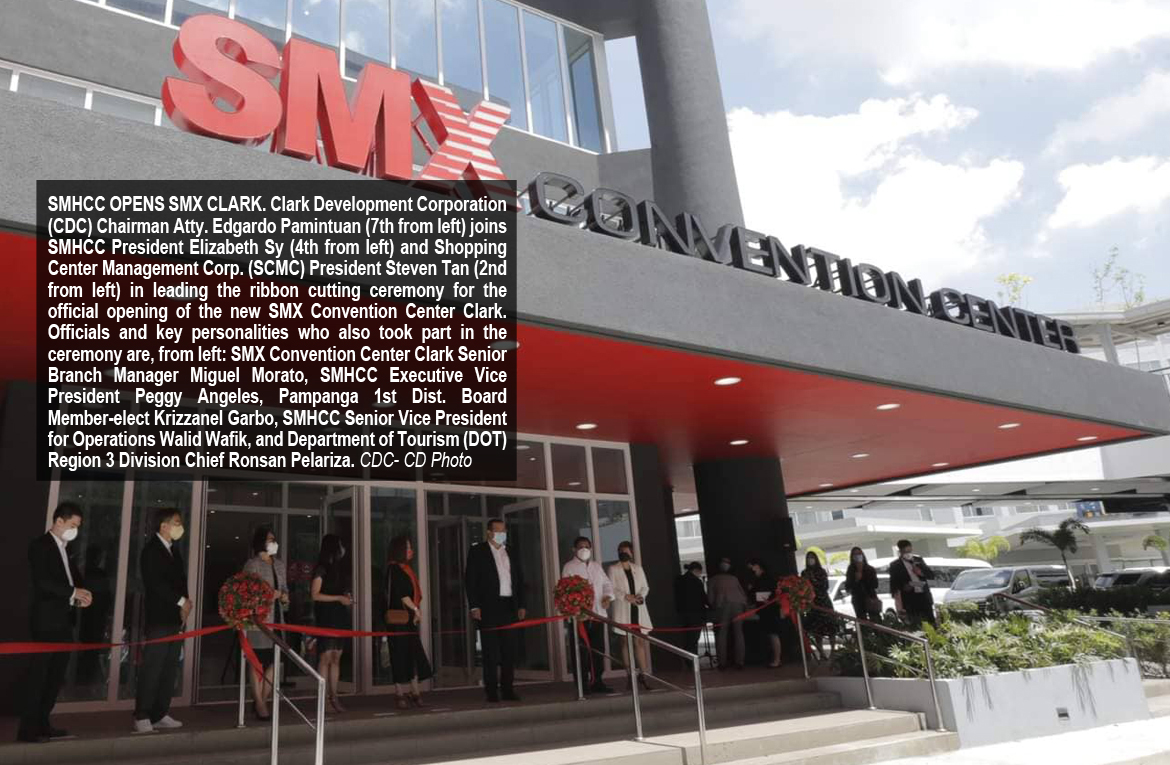 CLARK FREEPORT—Clark Development Corporation (CDC) welcomed the opening of the SMX Convention Center Clark which is envisioned to boost the Freeport’s positioning as a preferred Meetings, Incentives, Conferences, and Exhibits (MICE) destination across the country.

This new convention center is the second largest stand-alone convention center after the SMX Manila. It features a space of 4,000 sq. meters with two level event venues, mezzanine floor for offices, and three trade halls which can accommodate about 900 persons when combined in a cocktail set-up.

The facility also has three function rooms with a capacity of 450 to 1000 guests depending on the set-up, and 14 meeting rooms which can house up to 700 attendees when combined and customized to preferences. Contiguous to its area are the Park Inn by Radisson Clark and the SM City Clark. These properties are interconnected through the SM Sky Line that is slated to be launched on Friday.

In a press conference, CDC Vice President for Engineering Services Group (ESG) Dennis Legaspi mentioned that the establishment of a convention center in the Freeport reinforced Clark’s suitability as a premier MICE location.

“The SMX is a welcome addition to what we have in Clark.  We’ve been saying that Clark cannot put a claim on being the MICE destination of choice without having this convention center that is large enough to accommodate local and international gatherings,” Legaspi added.

Officials from the SM Hotels and Conventions Corporation (SMHCC) also expressed elation and optimism in accommodating various events and activities within the zone.

“We are very excited for the opening of the SMX Clark and we will do our utmost to have more events, more happenings in Clark. We want to see this complex booming with guests, and events, and things to assist them well in Clark,” SMHCC Senior Vice President for Operations Walid Wafik said.

In addition, SMHCC Executive Vice President Peggy Angeles likewise mentioned that the presence of the SMX Convention Center in the Freeport is a testament of their confidence on the potentials of Clark as an ideal MICE and tourism hub.

“SMX Convention Center’s presence in this vibrant district of the North solidifies SMHCC’s unprecedented growth and optimism as Clark Freeport is poised to become the preferred MICE and tourism destination in the Asia Pacific region by 2030. What you have seen today are just few of the countless and creative ways of transforming these event spaces at SMX into slice of life representations that exude dynamism, rhythm, and energy,” she said.

278 thoughts on “CDC welcomes the opening of SMX Clark”