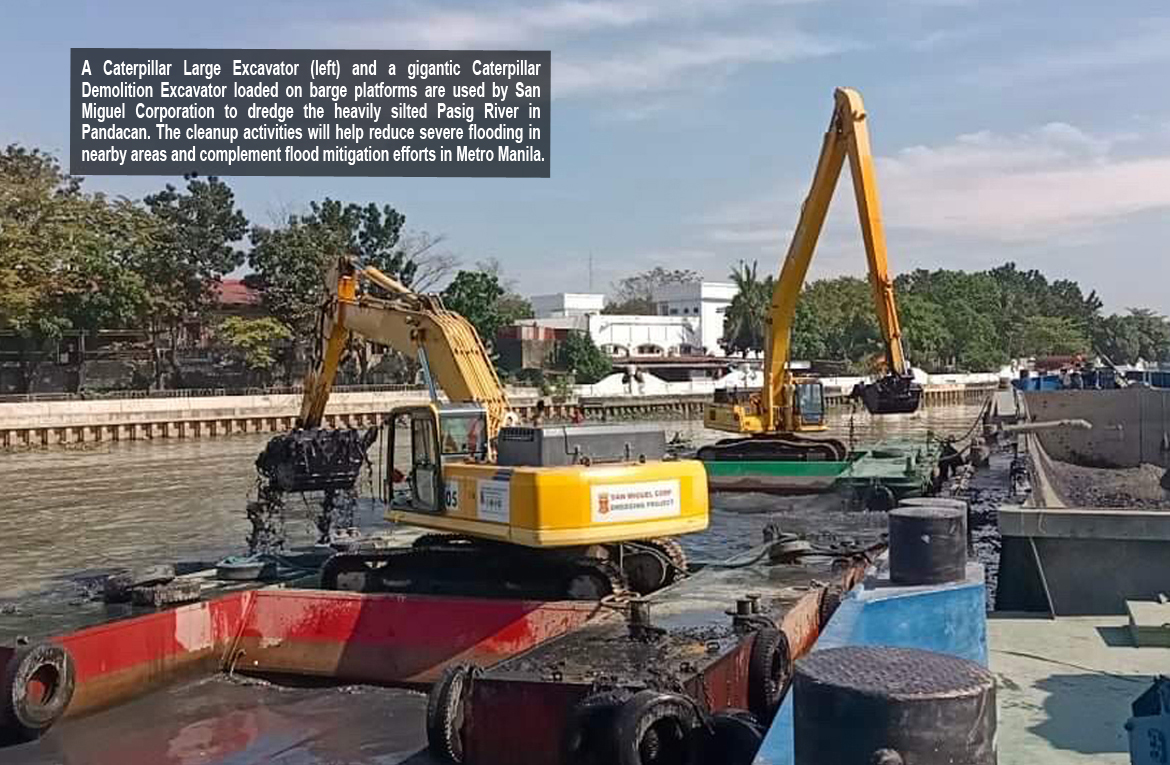 San Miguel Corporation (SMC) reported that its massive initiative to clean up and rehabilitate the Tullahan and Pasig rivers and help mitigate flooding throughout Metro Manila, has gained ground, with key sections of both rivers now significantly deeper, wider and able to carry larger amounts of floodwater.

SMC President and Chief Executive Officer Ramon S. Ang said that after 22 months of cleaning up major segments of the Tullahan-Tinajeros River system, and nine months of activities at key sections of the Pasig River, the company’s most recent hydrographic surveys show significant improvements in both rivers’ depths and carrying capacity.

Specifically, Ang said that the Tullahan River’s depths at areas along the 10-kilometer stretch the Company’s cleanup teams have worked on, are now between three to five meters, compared to one to two meters previously.

This is due largely to the teams’ removal of silt and solid wastes from the river’s depths, which restrict both the water’s flow and capacity, contributing to increased flooding.

“Essentially, what we’ve accomplished is to remove the silt and wastes that have made these rivers shallow and increase their ability to receive water from upstream channels, particularly during heavy rain or typhoon season, which is when severe flooding in many areas in Metro Manila occur,” Ang said.

He added: “At a particular section in Potrero and Marulas, our teams have removed eroded soils that extend some 10 to 15 meters wide, which used to restrict the flow of the Tullahan river. We’re happy to report that areas near Tullahan like Valenzuela now experience less instances of severe flooding, and if there are floods, they subside much faster now.”

Meanwhile, Ang said that for SMC’s Pasig River rehabilitation initiative, aside from continuing operations in Manila along the vicinities of Pandacan and Paco, activities are also now focused at the shallow Marikina River junction in Pasig City, the area where the Marikina and Pasig Rivers meet. Pasig river waters flowing into this area come from the Laguna Lake, via the Napindan floodgate.

“The Marikina River junction area is particularly critical as it acts like a bottleneck, restricting the flow of water flowing from the Marikina river. This causes the massive flooding we always see in upstream areas,” Ang said.

“Once we deepen these areas, water will flow more freely and there will be less cases of overflow in areas that typically experience them,” Ang said.

SMC has allotted a P1-billion budget for the program that was launched in 2020.

For the P2-billion Pasig rehabilitation effort, the company is currently extracting at least 3,000 metric tons per day to meet its new 75,000-metric ton per month goal. There are now two groups in operation in Manila and Pasig City.  In March alone, these two groups removed 78,200 metric tons.

SMC is upping its daily extraction target to at least 5,000 metric tons per day in June as more equipment arrive. This is to meet its 125,000-metric ton per month goal and a total of three million metric tons in two years.

Thus far, SMC has removed some 344,910 metric tons of silt and waste from the Pasig River since it started its cleanup activities last July 2021.

Meanwhile, Ang also reported that its coastal cleanups in Batangas province and Navotas City are also progressing well. In particular, its efforts in Calatagan, Batanges are receiving an extra boost from students and volunteers who have been turning up in increasing numbers to help out.

Ang said that with pandemic restrictions easing, more volunteers are joining the company and government volunteers in removing wastes from the shorelines. Recently, over a hundred students, including beneficiaries of SMC’s education assistance programs, came to help out at the weekly clean-up in Calatagan, Batangas.

To date, Ang said a total of 4,917 garbage bags of residual waste have been collected from shores of Calatagan.

“We’re happy that aside from the things the students learn from school, we are also able to influence them somehow to have a sense of environmental stewardship at an early age. We hope this will help mold them into responsible leaders when they grow up and become more responsible for their communities,” Ang said.

SMC’s coastal cleanup teams in Tanza, Navotas, on the other hand, have removed 7,293 bags of garbage to date, with the help of the Department of Environment and Natural Resources (DENR) and local community volunteers.

SMC’s weekly cleanup activities in Navotas is located at Isla Pulo, where the Tanza Marine Tree Park is located. The 26-hectare mangrove strip of an island with a 3.5-kilometer shoreline, serves as a natural barrier that protects nearby cities from storm surges and coastline erosion.          “As majority of the population is now protected against the virus and restrictions easing, we expect our cleanup efforts for both in our rivers and coastal areas to go a notch higher with more volunteers and more equipment arriving in the coming months,” Ang said.