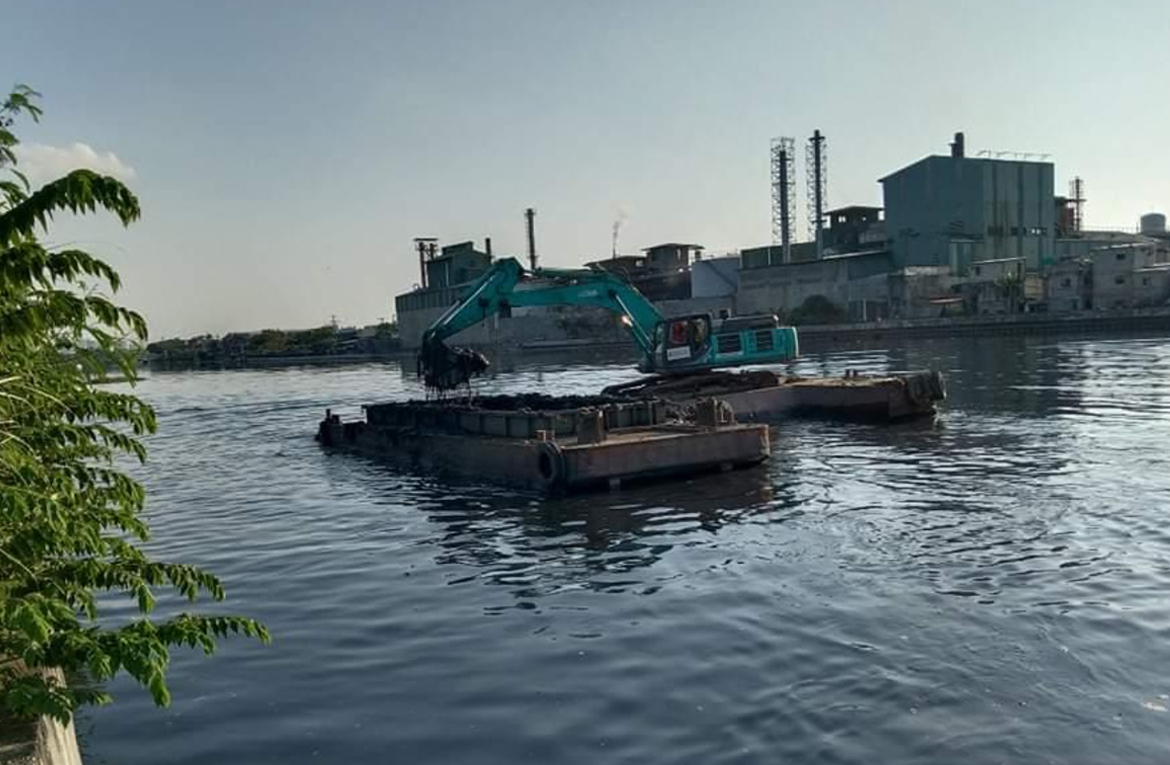 San Miguel Corporation (SMC) is eyeing to remove a total of 1 million tons of silt and solid waste from the Tullahan-Tinajeros river system by June this year— over a year since it implemented its massive P1-billion program to clean up and rehabilitate the 27-kilometer river system and help mitigate flooding in Malabon, Navotas, Valenzuela, and other flood-prone areas.

The SMC river cleanup initiative, which SMC conducts in partnership with the Department of Environment and Natural Resources (DENR), complements other flood mitigation efforts in Navotas, Malabon, Valenzuela, and Caloocan.

“Throughout the pandemic, and through many typhoons that have passed, our clean-up team has been relentless in their efforts to remove waste and silt from the Tullahan River. We’re encouraged by the big, positive changes we’ve already seen after just over one year of cleaning up the river. That’s why we have steadily built up our extraction capacity, bringing in more equipment and employing more people to help,” Ang said.

He noted that throughout the worst typhoons that came at the tail-end of 2020 and throughout 2021, no major flooding in usually flood-prone areas, was observed. Floodwaters that did manage to make it into streets also subsided much faster, compared to previous years, he said.

This, Ang said, was due to the deepening of the Tullahan river–which allowed it to carry higher volumes of floodwaters out to the Manila Bay–as well as the installation of new and more efficient pumping stations by government.

“The improvements we’ve seen in 2020 and 2021 have proven that we can better manage flooding if we just keep our rivers clean, and if we maintain an efficient, effective, and responsive flood mitigation system.  It will not work if we don’t have both components, and if there is no support and cooperation from the communities. We hope that in the coming years, as we continue our cleanup and rehab efforts for the Tullahan river, we can enjoin more people to take up and support this cause of keeping our rivers clean,” Ang added.

Ang also said that the company is gearing up to expand its other major river rehabilitation initiative—its P2 billion cleanup of the Pasig River, which has been ongoing for more than six months now.

SMC will ramp up its Pasig River rehabilitation initiative with the hiring of more personnel and acquisition of new equipment in the coming months, to boost flood mitigation for Metro Manila. These new equipment will also be used for its river cleanup efforts in Bulacan.

Ang is confident that the company will exceed its own 600,000 tons yearly target waste extraction from the Pasig River, or 50,000 tons per month.

To date, the project has removed 178,300 tons of waste from the historic river, dubbed as the number one plastics-emitting river in the world, accounting for a huge chunk of the planet’s ocean plastics.

“For the Pasig River initiative, we are targeting a higher daily output of 3,000 tons in a span of three years. That’s 3 million tons in all. Just like in Tullahan, we will continue to adjust our targets as needed, and also prioritize flood-prone areas near these rivers,” Ang added.

Ang said he expects SMC’s Pasig River cleanup to move a notch higher with additional equipment expected to arrive in March. The new equipment will include those that will be acquired through a donation by NYK Line of Japan to support the project.

Last year, SMC and NYK signed an agreement that will allow the shipping and logistics company to donate $1.5 million over a five-year period to buy additional equipment needed for the project.

Ang reiterated that the projects, which SMC is undertaking as its social responsibility and as part of a larger push for greater environmental sustainability in the country, aims to remove decades worth of garbage and silt from the rivers to deepen and widen them.

This will increase their capacity to take in floodwaters and reduce severe flooding throughout Metro Manila.

“Flood mitigation is a primary consideration in cleaning up these rivers, but keeping them clean over the long-term will yield so much more benefits. These include improved marine biodiversity and even economic opportunities in tourism and transportation, which our people can enjoy. Getting to this stage will however entail continued close collaboration between all stakeholders, including local government units and the communities along the river.

It will also require effective solid waste management–in particular, the construction of waste water treatment facilities that will put an end to the release of untreated wastewater into the rivers, Ang said.

Currently, SMC’s Pasig River cleanup is focused at critical shallow areas in Pandacan, Malacañang, and Sta. Mesa, including at the junction of San Juan River.

SMC is also set to expand operations to other shallow portions, namely the C-5 area near the Marikina river junction, at the mouth of Manila Bay, and at the Makati-Estrella area.

For Tullahan, SMC’s dredging area covers the first sectors from the mouth of Manila Bay in Navotas City, before moving to Malabon and Valenzuela City, particularly sections of the river in Marulas, Valenzuela, and in Potrero and Tinajeros, Malabon.

Currently, dredging is ongoing near Catmon, Maysilo and Niugan in Malabon.

SMC is eyeing to start the cleanup and channel improvement project for the Marilao-Meycauayan-Obando river system (MMORS) as well as the other active rivers and tributaries in Bulacan,  a major component of its flood mitigation initiative for the province.

For this, the company is looking to remove around 3,000 tons per day of silt and solid waste.         Currently, a number of Bulacan-based graduates of a special SMC-TESDA Heavy Equipment Operations course provided by SMC to former settlers of Barangay Taliptip in Bulakan, Bulacan–future site of the airport–are employed as part of SMC rehabilitation teams for the Tullahan and Pasig rivers.