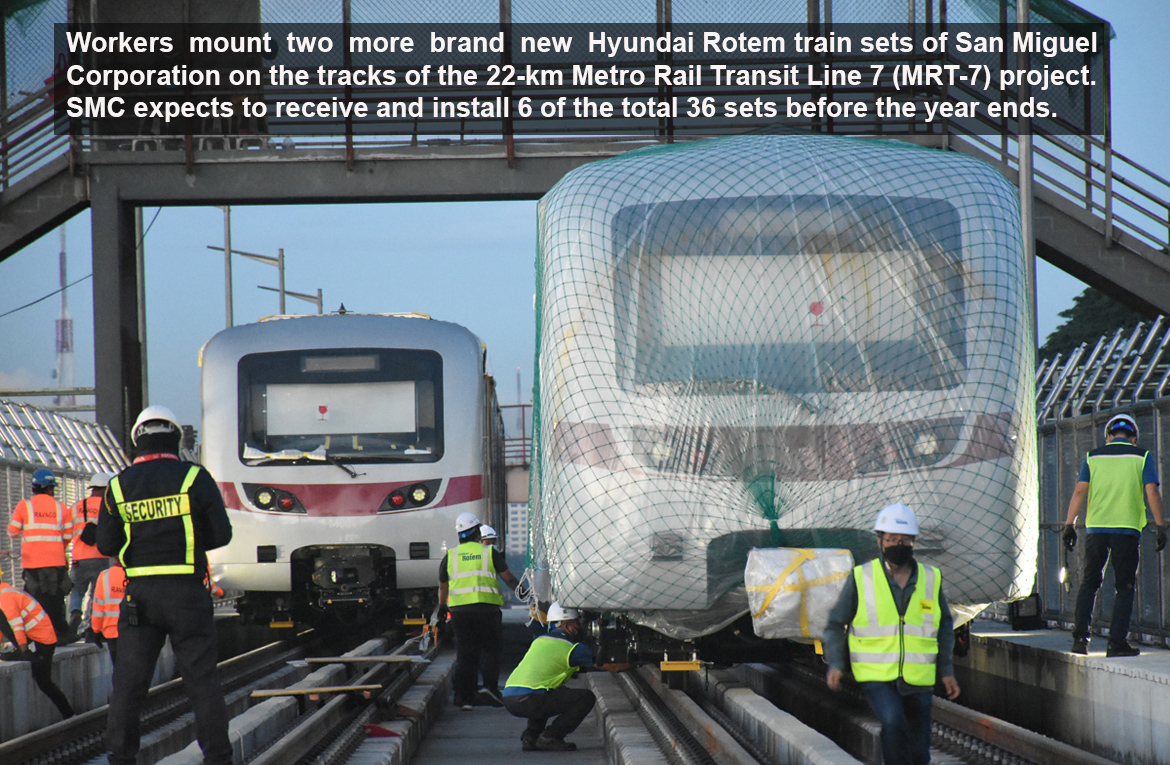 “Work continues non-stop on the MRT-7 project, so we can meet our target start of operations by end of 2022. I’m glad to report that we’re on track to meet all the key milestones we expect this year,” SMC president Ramon S. Ang said.

“Our ongoing MRT-7 project and other existing and planned mass transport systems should remain the backbone of mobility solutions in the city but we need to integrate these with other sustainable means of moving around to truly address the immediate concerns of the metropolis and best meet the needs of everybody.”

Similar to the first two train sets that arrived last September, these were mounted on the MRT-7 tracks between University Avenue and Tandang Sora, last October 23 and October 24. The entire MRT system will have a total of 108 cars.

The much-awaited mass transit system, fully funded by SMC as concessionaire, will serve thousands of commuters from North Avenue in Quezon City to San Jose del Monte in Bulacan.

“The process of unloading the trains from the ship, transporting them to the site, and placing them on the tracks is a meticulous process. Safety of people and the trainsets are a priority. But I think we’ve gotten better at the process and look forward to more efficiently doing this as more trainsets arrive in the coming months,” Ang said.

The two trainsets were shipped by manufacturer Hyundai Rotem from the Masan Port and arrived in Manila last October 17.

“As work on the MRT-7 project progresses further and faster, we will be able to increase the number of train shipments from Korea in the coming months and mount these on the tracks later on for testing. In the meantime, we regularly inspect the trains in storage and are taking all necessary measures to properly maintain all trainsets so they will be in tip-top shape once we are ready to test and operate,” Ang said.

With project completion at 56.03 percent, MRT-7 is seen to start test runs by December 2022. Despite pandemic restrictions and pending right-of-way issues, the installation of bored piles, girders, and other foundational works are going smoothly.

Ang said that based on the reports of company engineers and personnel, the state-of-the art trains are quite spacious and are akin to the trains that are currently being used in South Korea’s modern railway system.

“People who have not been able to visit South Korea or travel around using its trains will be in for a great experience, whether they are commuting to work or school.  As we expect the economy to continue to open more especially in the coming years, MRT-7 will be ready in time to serve the public as our economy rebounds and resumes growth,” Ang said.

“Given the need for social distancing and limited capacity enforced in public transportation amid the constant threat of COVID-19, we don’t expect to achieve these numbers right away but rest assured, the trains will serve their purpose of bringing more people from Quezon City to Bulacan  faster and safer post-pandemic,” Ang said.

Once complete, the MRT-7 will reduce travel time from Quezon City to Bulacan to just 35 minutes.

Through the Quezon North Avenue Joint Station, the MRT-7 will link with MRT-3 and LRT-1.