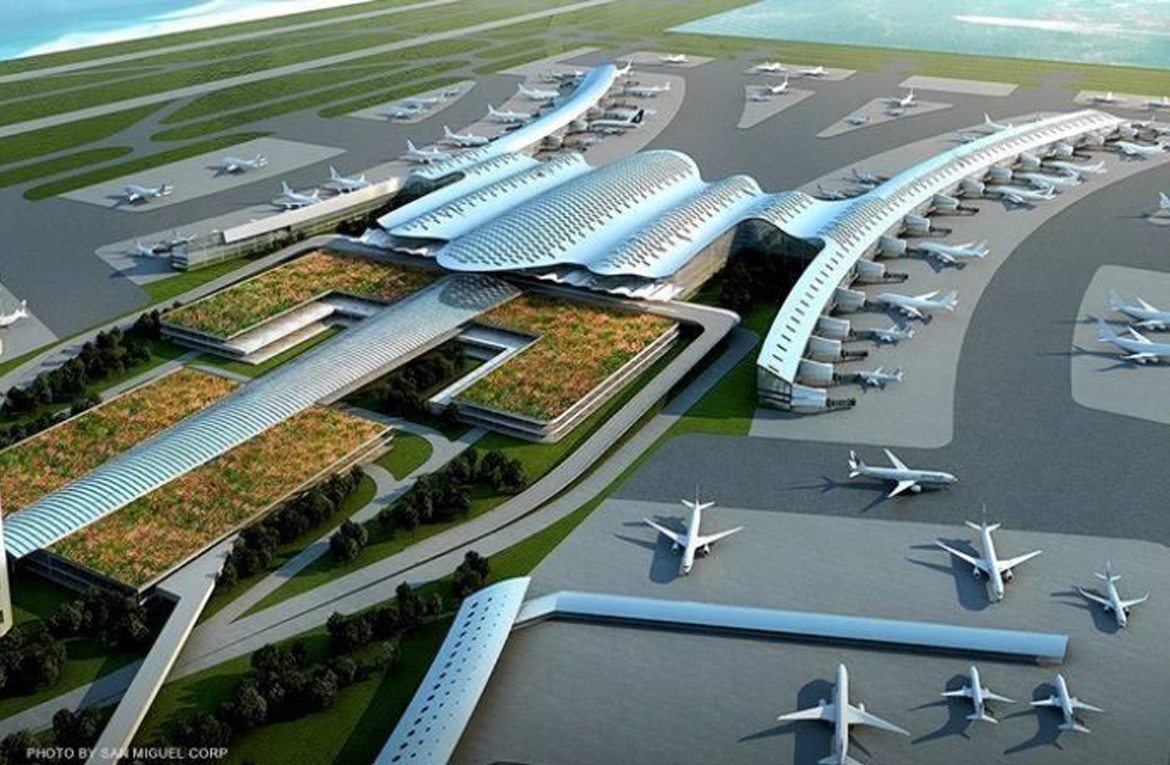 San Miguel Corporation’s (SMC) airport and aerocity project in Bulakan, Bulacan will be a pacesetter for green cities that are both sustainable and equitable, one that aims to address social and environmental concerns that affect even the country’s major financial districts today.

This, according to the country’s top urban planner and green architect Felino “Jun” Palafox Jr. who outlined some of the major features that he and SMC president Ramon S. Ang envision for the much-anticipated development in Bulacan.

Palafox Associates has been tapped by SMC to help masterplan its airport plus city concept or “aerocity” development–where its massive, P740-billion airport project, the New Manila International Airport will be located.

Comparing the Bulacan project to environment-enhancing developments in Dubai and other parts of the world, Palafox said the development will integrate the best practices in green, sustainable, and disaster-resilient architecture that he has advocated and implemented in some 1,700 projects in about 45 countries worldwide.

Palafox said the new development will take advantage of SMC president Ramon S. Ang’s forward-thinking and bias for taking action to undertake projects without cost to the government.

“I’m aligned with the mission, vision and goal of Ramon Ang. He invited me to partner with him in this new undertaking: a green aerotropolis. At Palafox, we’ve analyzed that we need at least 100 new cities all over the Philippinex by 2050. If we don’t do it, our cities will become as bad, if not worse than Metro Manila. We envision the Bulacan Aerocity development as the first model and pacesetter for future green and sustainable cities in the country” Palafox said.

For his part, SMC president and chief operating officer Ramon S. Ang said that the project will be a legacy project, not just of him and Palafox, but of the present generation to future generations of Filipinos.

“I want to emphasize to our countrymen that what we are building is more than just an international gateway with four runways, with an infrastructure network to connect it directly to Metro Manila and many other points in Luzon. The airport is just one component—what we’re building is the Philippines’ first truly green city of the future,” Ang said.

“We see this project as a silver lining amid all the difficulties we face today because of the pandemic. All Filipinos are looking forward to a future where COVID-19 is less of a threat to our lives and our economy. We want to see the positive developments that lie ahead for our country. I believe this is one of the best things we can look forward to with much hope and optimism,” he added.

Ang also touted the significant economic impact the project will have on the country and the Filipino people.

“Airport cities around the world generate a significant amount of jobs, and that is ultimately what we want to do. We need jobs and opportunities for our countrymen today, but more importantly, for the next generation in the coming years, especially since we are trying to recover from a pandemic,” Ang said.

He added that “The jobs we will generate will not be limited to the airport city, or Bulacan province alone, but will extend to neighboring provinces, the rest of Luzon, and many other parts of the country which will benefit from increased tourism, increased investments because of better accessibility.”

Ang also said that he and Palafox have agreed to integrate best practices in green architecture, green urbanism, and green urban planning to the Aerocity development, and avoid the mistakes that have contributed to the present-day problems of the country’s biggest cities today.

Palafox pointed out a number of contributing factors that have made life difficult for many people working in today’s primary business districts, which the Aerocity project will aim to address.

“The mistake in Makati’s central business district, Bonifacio Global City, and Ortigas is exclusionary or discriminatory zoning—excluding the employees from their places of work. Employees are like OFWs in their own countries, because they are five to six hours away from their places of work and families, because of traffic congestion,” Palafox said.

Palafox related that in 1990, Makati reclassified and increased the density of the Makati CBD by four times. However, access capacity and mobility was not similarly increased four times.

Adding to the problem is the fact that the CBD is constricted by gated, low-density neighborhoods, villages, and a gated cemetery—making it more difficult for most people to walk to work.

“Elsewhere in the world, NYC, European cities, Singapore, are ‘walkable’ because within 250-750 meters, there is a walking facility. Around Makati City, BGC, and Ortigas, you’re surrounded by gated communities, so you have to walk about one to two kilometers to go around. Our planning in the Philippines had the wrong model: Los Angeles, which was designed for automobiles,” he explained.

He also cited the prevailing influence of Spanish rule as a constraint.

“I’m talking about the colonial town plaza concept, where the elite or illustrados lived around the town plaza where the church, munisipyo and central park are. Meanwhile, the peasants or indios and Chinese merchants lived in extramuros, or outside. That was 500 years ago, but it’s still a concept in our urban planning development today,” he explained.

Meanwhile, for Ang, apart from generating jobs, one of the most important considerations for the project is improving the environment—not just within and around the airport project, but throughout Bulacan province.

“From the very beginning, I promised Bulakenyos and all our stakeholders in government that the airport project and the aerocity development will have significant benefits for the province and the whole country. We will make sure to do everything right, because this is our biggest investment to date, and our legacy to the next generations,” Ang said.

“Specifically, we will clean up the environment, clear the river systems to enable water to flow freely again and address flooding; we will establish mangrove forests, with some 190,000 mangroves all over Bulacan and neighboring provinces to enhance biodiversity and help mitigate tidal flooding. We’re also looking to develop and enhance natural habitats of marine and bird species. There’s so much more we can do,” he added.

For the development itself, Ang said he and Palafox look to integrate the following concepts:

* Adopt green architectural and green urbanism guidelines over and above the country’s building and zoning codes, which Palafox said no longer follows international standards.

* Follow the structural codes of other countries, specifically those situated in similar earthquake zones as the Philippines.

* Creation of an “innovation hub” where both learning institutions and technology-driven global companies can thrive. As such, Palafox has put forth a “town and gown” or university town concept, where learning institutions and the community partner together, such as in Cambridge and Boston in the United States, where Harvard University is. SMC is also looking to put up a medical and research facility along with the school.

* The aerocity project will be equipped with the latest in digital infrastructure, to enable people to work and conduct business anywhere.

Meanwhile, the aim for the Bulacan development is to allot highest and best use for the improvement of the environment, and to address climate change. These will be included in his proposed guidelines for green architecture and green urban planning.

Ultimately, the plan is to positively impact the whole of Bulakan, Bulacan so that in the end, Bulacan will not just be a province with an airport, but an airport-driven province.

In master-planning the development, “ridge to reef” planning will also be employed, taking into consideration the improvement of mountain ridges or highlands, midlands, the lowlands, and the coastline.

Public transport will also be easily accessible. One of the things being considered is a bicycle highway connected to the train system.

Palafox said the city will be a “healthy city”. It will be “walkable and attractive”. It will have less need for security because it will be open and there won’t be too many walls around the city, which Palafox sees as encouraging crime, and contributing to the heat index, as they obstruct cross ventilation in cities.

Meanwhile, the coastal area or Manila Bay waterfront will also be utilized for walkways, waterfront promenades. Finally, Palafox and Ang said they will prioritize the triple bottomline: people first for social equity, alleviating poverty, and job creation or inclusivity. Then planet and the environment come next, with prosperity, economic growth, and profit following.