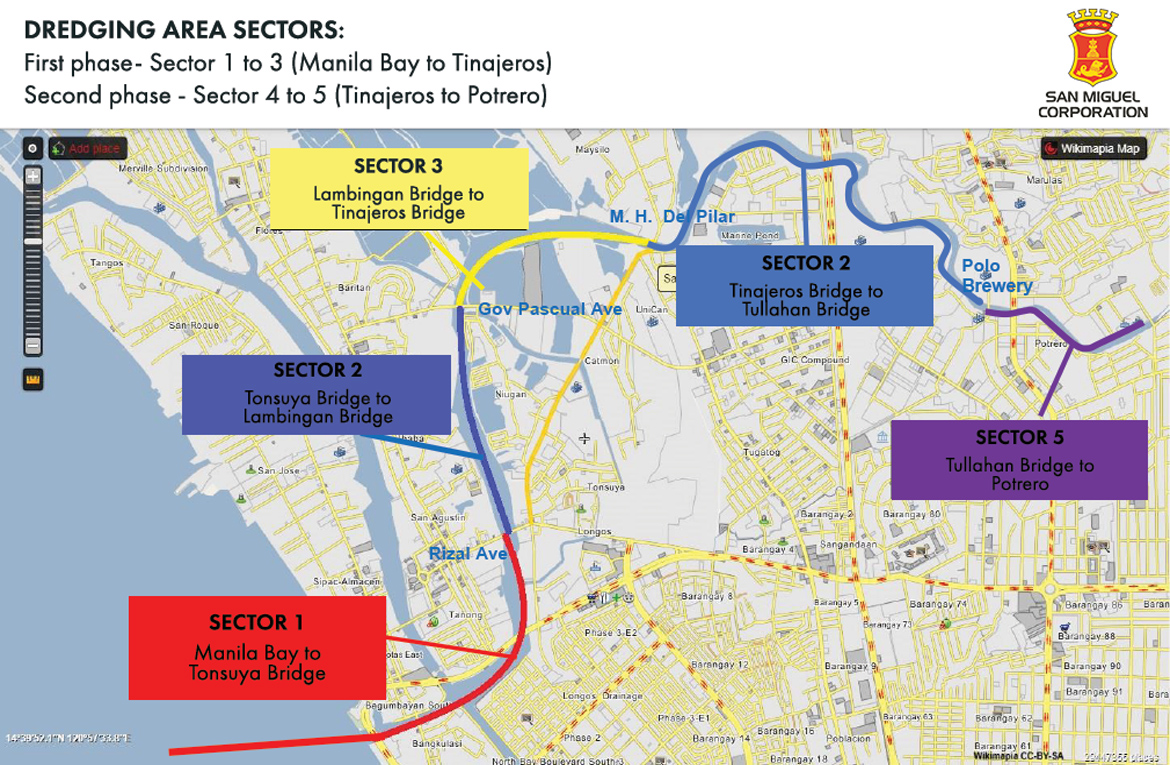 San Miguel Corporation (SMC) is extending the total reach of its P1-billion Tullahan-Tinajeros river system cleanup to 11.5 kms, close to halfway of the entire 27-km. stretch, to further complement ongoing flood mitigation measures in the cities of Navotas, Malabon, and Valenzuela, before the start of the rainy season.

SMC president and chief operating officer Ramon S. Ang said the Department of Public Works and Highways (DPWH) has approved the company’s dredging plans for Sectors 4 and 5 of the river system, covering the length of the river from Tinajeros Bridge to Potrero in Malabon and Valenzuela cities.

The section represents an additional 6.3 kilometers of dredging area, in addition to the initial 5.25-km Sectors 1 to 3 from the Manila Bay in Navotas, to the Tinajeros Bridge in Malabon, which SMC had been working on.

“We are making all the necessary preparations now to move into the next phase of our river cleanup and flood management initiative. We’re investing in new equipment, and hiring more people. We are fully committed to our advocacy of cleaning up major rivers and helping our cities with flood mitigation,” said SMC president and chief operating officer Ramon S. Ang.

“We thank the DPWH for approving our plans for this new stretch, which will benefit Valenzuela and upstream portion of Malabon. As soon as we acquire the special equipment, we will start work on these sections by early April, while simultaneously maintaining our dredging operations from Manila Bay in Navotas to Tinajeros Bridge, or sectors one to three,” Ang added.

Ang said that aside from cleaning and increasing the depth of the river to accommodate more rainwater, especially during the typhoon season, the DPWH has required the widening of portions of the river.

SMC will be working closely with the local government units and MMDA Flood Control group to implement the project.

“Many parts of the river have become shallow, with the depth down to one to two meters. We were able to increase the depth of the river and this complemented the pumping stations at Navotas and Malabon. When heavy typhoons hit the country towards end of last year, more flood waters flowed into the river. But no heavy flooding was reported in these flood-prone areas,” he said.

For the five sectors, SMC is looking to dredge a total of 1.5 million cubic meters of silty sand and solid waste.

“To enable to us to effectively dredge the river and help reduce flooding, we are again asking the support of all stakeholders, including the local government units to help us maintain the river and contribute to the national government’s program to rehabilitate the Manila Bay,” Ang said.

Specifically, Ang said the company is acquiring an amphibious excavator for shallow waters and river widening, and a suction cutter dredger that can handle big volume throughput operations, like in the Pasig River.

“We are happy to have them in this Tullahan dredging project. They will gain added training and competence in handling different kinds of heavy equipment. This will prepare them for future dredging projects and this will allow them to earn income for their families,” he said. The graduates, who started work Feb. 16, came from families that received financial assistance from SMC and were able to build new concrete houses at safer areas in Bulacan province, after relocating from the future site of SMC’s P740-billion Manila International Airport (MIA) project.