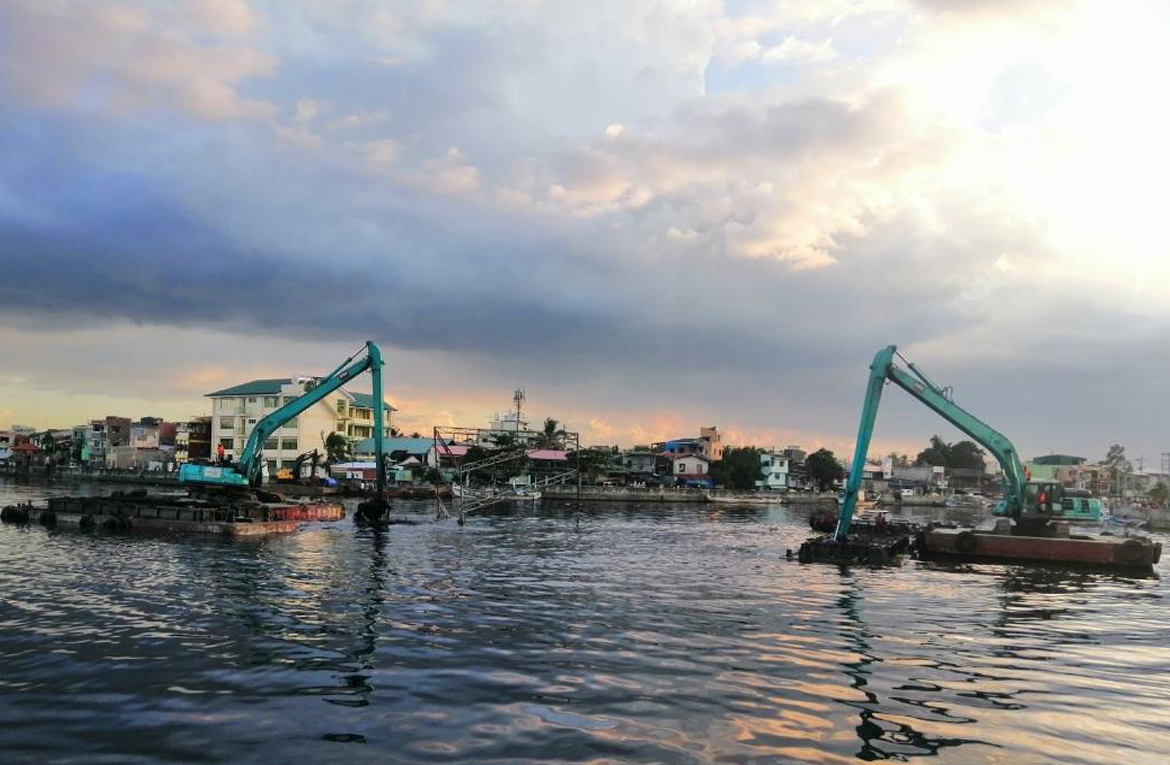 San Miguel Corporation (SMC) will accelerate its dredging operations at the Tullahan-Tinajeros River System in the first two quarters of the year, before the rainy season sets in, to help reduce flooding at areas near the 27 kilometer-long tributary stretching from La Mesa Dam to the Manila Bay.

This, after SMC president and chief operating officer Ramon S. Ang reported that the company was able to extract 83,600 metric tons of silt and solid waste from the river in 2020, despite limitations brought on by the Luzon-wide lockdown due to the Covid-19 pandemic. The dredging complemented the flood mitigation measures implemented by the cities of Navotas and Malabon.

“We extract about 600 metric tons of waste daily from the Tullahan, and at this rate, we expect to extract 100,000 metric tons in a month’s time. The relatively dry months of January to May gives us an opportunity to intensify the cleaning, deepening, and widening of the river so that more areas can avoid flooding risks during the rainy season,” he said.

Launched together with the Department of Environment and Natural Resources (DENR) in early 2020, the project is a P1 billion corporate social responsibility (CSR) initiative of SMC to help address flooding in parts of Metro Manila and Bulacan. SMC resumed the P1 billion dredging project in June, following the lifting of strict quarantine restrictions.

SMC is currently dredging the initial 5.25-kilometer Tullahan river section from Barangay Tanong in Malabon City, to the mouth of the river leading to Manila Bay in Navotas City. In two years, SMC is looking to dredge a total of 1 million cubic meters from the Navotas-Malabon section alone.

To further increase the river’s capacity to receive the heavy volume of rain water, Ang said the Department of Public Works and Highways (DPWH) said the Tullahan River’s depth should be increased to five meters as many parts of the river’s depth has been greatly reduced to only one to two meters.

“With Navotas and Malabon, we found out that the greater handling capacity of the Tullahan River—the result of our dredging activities–has allowed water from these cities’ pumping stations to be easily channeled to the river going to Manila Bay. This has reduced large-scale flooding in these areas even during the previous typhoons that inundated many parts of Metro Manila and Luzon,” Ang said.

Ang said that to further improve dredging output, SMC is adding dump trucks and excavators and will also purchase special equipment to handle sections of the river with very shallow waters and solid riverbed.

Earlier, SMC also announced that it will employ former residents of Barangay Taliptip in Bulacan for the Tullahan dredging project to further hone their skills in preparation for its Bulacan river systems and Pasig cleanup initiatives.

These former Taliptip residents recently graduated from heavy equipment courses funded by SMC under the Technical Education Development and Skills Authority (TESDA) and are looking to be employed in the upcoming construction of P740-billion Manila International Airport project.

As flood mitigation is major component of the airport construction, Ang said that the former Taliptip residents who graduated from the heavy equipment courses will be utilized in the river channel improvement project for tributaries belonging to the Marilao-Meycauayan-Obando River System (MMORS) in Bulacan.

SMC plans to dredge, clean, widen, and deepen the Alipit or Taliptip River, Sta. Maria River, and the Meycauayan River as part of its flood mitigation strategy for the Manila International Airport that will also benefit the whole of Bulacan.