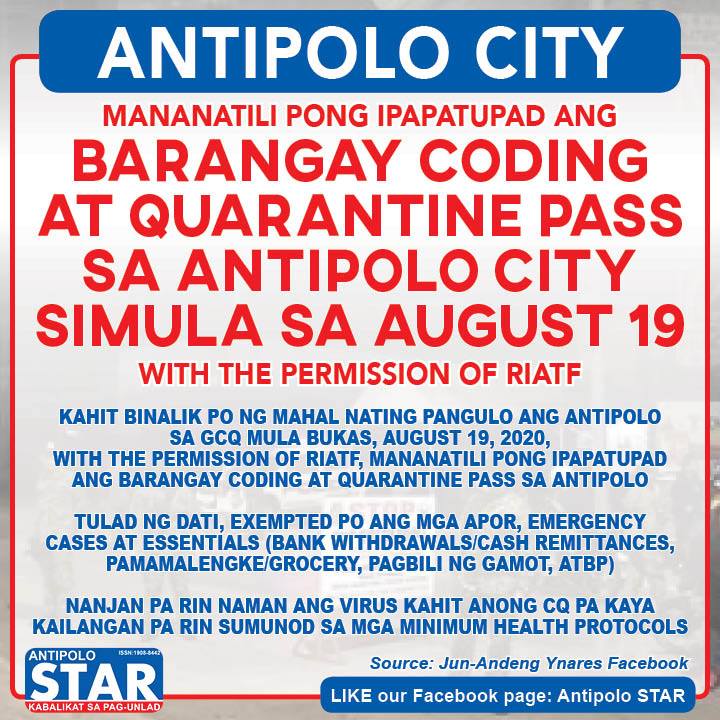 Antipolo City, along with Rizal Province and Metro Manila, reverts to the less stringent GCQ (General Community Quarantine) effective August 19, 2020 but will still impose Barangay Coding and require the Quarantine Pass from its residents.

The added safety measures in Antipolo, announced through the Facebook Page Jun-Andeng Ynares, will be implemented with the concurrence of the RIATF (Regional Inter-Agency Task Force).

The rest of the country remains under the more lenient Modified GCQ.

The move to revert to GCQ goes against recommendation by statisticians who are monitoring the pandemic curve as well as the health sector which urged the administration to extend MECQ in Metro Manila for another two weeks.

Professor Guido David of the University of the Philippines Institute of Mathematics said that another 15-day MECQ in the capital region could prevent up to 20,000 people from contracting the dreaded disease.

The business sector on the other hand recommended relaxing the strict quarantine protocols. Government is trying to walk a line between protecting the populace from Covid-19 and reviving the economy that has experienced its worst slump in more than three decades.